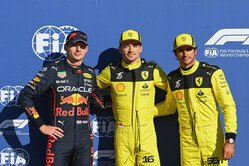 What a pole position, man! Talk us through your lap because it was amazing to watch and everyone has enjoyed it!
Charles Leclerc: Yeah, I'll start in English, I'll finish in Italian, as always. But yeah, it's amazing. I mean, it wasn't an easy qualifying session. I knew that there was quite a bit of potential in the car but I didn't put everything together. I knew that in this last lap in Q3 I had to put everything together and I managed to do it, so very happy with the lap, very happy with the performance. It has been a great weekend until now. The feeling with a car is amazing. And I really hope that we can do just like in 2019 tomorrow.

Q; You surprised everyone with your middle sector. Lesmo 1 and Lesmo 2 were incredibly quick. Why? Did you feel something special there because it was much faster than before?
CL: I just took much more risk! It was the last lap and I knew I had to find quite a lot of performance there and I just went for it and it worked out.

Max, second position, just at the end. You were suffering a bit on the maximum speed in the first and third sector? How was your lap in general?
Max Verstappen: Yeah, it was close. But of course, we chose to go for a bit more downforce around here and I think over one lap it's maybe not the best. But I think for tomorrow it can be quite strong - and also knowing that we have to start a bit back, you know. But I think, all in all, it was still a good lap. I've enjoyed the whole weekend so far and I think it will be an interesting battle tomorrow.

Yeah, five positions of penalty will not be so easy in the approach to the first corner. Usually it's tricky there. How is it going to be for your mindset there?
MV: Yeah, just you know, trying to stay out of trouble, of course, in the beginning and then just work my way forward.

Well done, man. Thank you so much. Carlos, you were on pole on the first set of tyres. How was your lap, how was your session? Fantastic the first one, maybe not perfect the second stint?
Carlos Sainz: Yeah, no, it was honestly a very good quali session. I was feeling very well and I was pushing flat out through Q1, Q2, and Q3. The only issue is that in Q3 I didn't have a tow and this probably cost me those two or three tenths, you know, in the battle for pole position. But, you know, I'm starting last anyway tomorrow, so it's not like it changes my life. But yeah, very good lap. I had to take a lot of risks to compensate for the lack of tow. I was quicker in every corner but slower in every straight. So in the end I could not improve much.

Tell me please about tomorrow? It will not be an easy one, but maybe you can also have an extra support, an extra feeling from there.
CS: Yeah. I mean, I'm not going to lie. It hurts to be starting at the back tomorrow, especially with how competitive the car is this weekend. How good I'm feeling on the car, especially after this quali. And to know that I'd be starting at the back... I mean, I will do my best and I will try to put on a good show and make it back through the field because the pace is there, but I wish I could be there at the front with Charles in order to try and do a 1-2 tomorrow for the tifosi.

Welcome everybody to the fastest three drivers in qualifying for the 2022 FIA Formula 1 Italian Grand Prix. In third place, Carlos Sainz. In second place, Max Verstappen. And taking the 17th pole position of his career and his eighth of this 2022 campaign, our pole sitter, Charles Leclerc. A brilliant effort by you Charles, well done. Pole at Monza in a Ferrari. How sweet is that?
CL: It feels really, really good. We still need to finalise this tomorrow, otherwise it's pointless to do the pole on Saturday, but it is a very good surprise today, considering where we come from, especially in Spa. We were not expecting to fight for pole here. So it's a very good surprise at home. Yeah, there's a special motivation for this weekend and it's great that we managed to do a good job today.

Charles, you used the word 'surprise' about your pace, just where have you found the pace this weekend compared to a track like Spa?
CL: I mean, in FP1 and FP2 we tested a lot of things across cars, with Carlos, a lot of different things and we found different directions that were interesting. We were really struggling a lot in Spa and, yeah, we found some pace. So it's good. It shows that we worked in the right direction and I hope that tomorrow we can show that in the race also.

And was a 1:20.1s the maximum? Nothing left in the car?
CL: There's always something more, no? But the lap, I'm extremely happy with. In the first run of Q3, I didn't do a great lap, but then managed to put everything together on the second lap. So yeah, there's always a bit more, but I'm very, very happy with that one.

Now once all the penalties have been applied tomorrow, you'll have George Russell alongside you on the front row of the grid. Just describe the job that you have ahead of you tomorrow.
CL: Well, a good start, obviously, as always, and then we'll see. I think the race pace is strong, the feeling was really, really good. So, whatever happens in the first lap, I think we still have the pace to win this race, so we'll try to put everything together, no mistakes during the race and I think we can have a good Sunday.

Max, coming to you now: another great lap by you. You found time on that final run of Q3. Just how good was the lap? How good was the car?
MV: Yeah, I think the lap was pretty decent. Just the first sector we seem to be a little bit slow. So probably better straight-line speed, bit of the first chicane, not finding the right grip, but I think overall the rest of that felt pretty strong. Yeah, we chose, of course, the downforce level a bit higher, compared to some other cars but it felt alright and, of course, you know around here qualifying to race can always feel a bit different and my race runs, they felt really good, so very happy with that pace. So, I'm actually really looking forward to the race tomorrow.

You say you've gone for more downforce. How will that help you in the race tomorrow?
MV: I should normally be better for tyre deg, and hopefully we can show that tomorrow.

Talk us through the race. Do you think you can steal this one? Can you can you beat Charles tomorrow?
MV: With what I've seen from the long runs, it looks good from our side. I just need to have a clean Lap One, clear the cars in between us quite quickly, and then I think we still have a good chance, yeah.

Carlos coming to you now, great job by you. You held the advantage after the first run of Q3. What was your final run like?
CS: It was a good run. I had a bit of a messy out-lap because I didn't manage to find a good tow and I had to slow down a bit before the last corner to see if Lando was going through and giving me a tow - but he was clever enough not to do it. It's a shame though, because my lap there, the 20.4, I had to without the tow. And around here it's a bit costly. It was a lap on the limit: everything that I was losing on the straights, I had to pick it back up on the corners. I still managed to improve my Q3, first run lap by quite a bit. So, yeah, it means that in the corners, I must have pushed quite hard, no? But a bit of a shame not to have the tow to content for pole there.

Charles said the pace of the car is a nice surprise this weekend. Can we just get your thoughts on where you've taken a step forward this weekend?
CS: I think the overall feeling of the car since we put the car down in FP1, it was just a lot better than in Spa, the balance was a lot more together. So, it means that all the hard work done over these last couple of weeks is paying off. We've gone back to Maranello and put a lot of effort in trying to understand where can we do better and why maybe last two races haven't been going as planned. It doesn't mean that tomorrow we will be a lot more competitive, but it at least means that for today, we've put ourselves on pole and P3 at a track that we didn't expect. So, I'm happy for that and hopefully we can do a good recovery tomorrow.

Talk to us about the recovery tomorrow, what do you think is achievable from the back?
CS: I don't know! I'm going to push obviously, flat out from the beginning, try to make as many positions at the start, and just get to the front as quick as possible. Because then, if there's a Safety Car or anything, then anything can happen around Monza. I think it's going to be a very mixed race, there's a lot of cars out of position. So, there's going to be a lot of battles during the whole race. It's going to be quite a hectic one, especially those first 20 laps, I think. But then everything should settle down. Where can I get to? I wish top five like in France would be a good result. But given how quick the Mercedes are lately, is going to be a bit more tricky.

Do you get a lot of energy from the crowd here, the fans? Of course, John Elkann is here. We've got the President of Italy coming tomorrow. Are you going to feed off that?
CS: For sure. I mean, the feeling that we have as drivers here is... it cannot be compared to anything else. Since the moment we leave the hotel, 'til the moment we go back to a hotel, there's just a massive push and a massive cheer for us everywhere we go to. There's a particular excitement about Ferrari, about us here. It's a very special feeling that is very difficult to describe. I always struggled to describe it, but this, for sure, it's given us an extra tenth this weekend that we hope we can use to our advantage tomorrow.