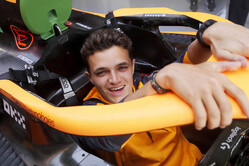 Though McLaren hasn't suffered the phenomenon experienced by a number of its rival, Lando Norris fully understands those drivers expressing concern at the potential for long-term damage to their bodies.

As the porpoising row rumbles on, McLaren, like Red Bull, is one of the teams that appears to have got it right, its drivers barely affected by the ground effect phenomenon.

However, while team bosses, and to a certain extent drivers, trade barbs, Lando Norris has come out in support of those drivers expressing fears over the damage the violent bouncing could be doing to their bodies.

"Obviously, that was the major talking point over the Canada weekend and I must admit to being a bit conflicted on it," he writes in his column for the Daily Telegraph, referring to last week's technical directive from the FIA.

"The truth is we are not massively affected, so we were not pushing for change," he admits.

"But safety has to come first," he insists. "If there is a real danger that drivers could have long-term health consequences from the bouncing, or that they could lose focus and crash, then something has to be done.

"I can see both sides," he admits. "The front two teams have clearly done a much better job than anyone else of interpreting the rules, so I can see why they would be against change mid-season.

"At the same time, without having experienced the severity of porpoising that others have, I do not want to criticise anyone. Safety has to come first, and while it might not be affecting me now, these regulations are long term.

"If I had a problem in a year or two which I felt was endangering my health, I know I would want my fellow drivers to have my back," he writes, without revealing whether the pun was intentional. "My main concern is that it is fair for everyone, ideally you would implement any changes post-season, but inevitably it is going to affect some more than others.

"Obviously, we have designed our car one way, with a certain philosophy in mind, and it could move things more in our direction or away from it. We shall see. There are people far brainier than me tasked with working it out!"

Referring to last weekend's race in Montreal, which he refers to as a "weekend from hell", and for which Andreas Seidl has apologised to both drivers, he writes: "Montreal was, truth be told, a bit of a weekend from hell for us. But there is no reason to believe we cannot turn things around and be a lot more competitive at our home race at Silverstone next week. After all, we went from 15th at the first race at Bahrain, where we were miles off the pace, to fifth in Australia two races later, and then a podium finish at Imola.

"Yes, we have been less competitive at the last two races in Azerbaijan and Canada," he admits. "But we know the reasons why, and we are working hard to put things right.

"It felt a bit like everything that could have gone wrong in Montreal did go wrong. In qualifying we had an issue with the power unit which ruled me out of Q2. That was a blow because those changeable conditions were just what we would have wanted, offering opportunities to make up places.

"Given the lack of overtaking in the race the following day, every place on the grid was invaluable.

"The race itself was frustrating, with the Virtual Safety Car coming out a few laps after we pitted and then getting double-stacked and having a few hiccoughs with the tyre change.

"Shoulda, coulda, woulda. I think a points finish might just have been on the cards had everything gone perfectly in qualifying and on race day, but any number of drivers could say the same. The truth is we did not have enough pace... and I have to hold my hand up to mistakes.

"It was a tough weekend for the team, with my team-mate also out of the points in 11th. But we will learn from it."

Looking ahead to next weekend's home race at Silverstone, he reveals: "We have a few things in the pipeline and I cannot wait to get out there. Just the drive into Silverstone is like nothing else, all that positive energy, from the marshals on the gates when you first arrive in the morning, to the fans waving union flags or wearing McLaren colours. You feed off the support. It makes a massive difference.

"We will do our utmost to turn around our Canada form. We have a few bits and bobs in the pipeline, the track surface is completely different and it will be interesting to see whether the new technical directive has come into effect by then."