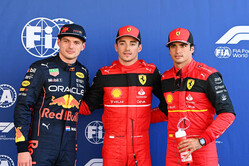 Charles, congratulations. Fantastic atmosphere we have here in Barcelona, and you're on pole position here for the first time. How do you feel?
Charles Leclerc: I feel good. It was a very, very difficult session. I mean, especially in Q3 because I did a mistake in the first run of Q3 and then obviously, I only had one lap. But it went extremely well. I had a bit of moments on my lap, but at the end, I made it stick and very, very happy with pole position. It was a it was a very good lap, and the car was amazing, too. So yeah, very happy.

Well, statistically, this track is known to be a track that is won from pole position. So you're in the best position tomorrow to win this race. Will that put you in a strong position for tomorrow's results.
CL: I am in a strong position to start the race. But we've been struggling with tyres in the last two races compared to Red Bull. So Max is just behind. And if we don't manage those tyres, we will lose that, that win. So we need to get on top of it and do a good job tomorrow with tyres management.

Well, you've got Carlos right behind you on the grid. So do you think you can put together a team effort to keep the Red Bulls behind you?
CL: Yes, I really, really hope so. I hope we can do a one-two together with Carlos. It will be great for the team. And yeah, we'll give it our all.

Max, congratulations. It's not the result you would have wanted. We heard that you struggled with some power issues. Did that cost you the pole position today?
Max Verstappen: I mean, it's always difficult to tell. But I couldn't do my final run. Either the DRS didn't open or I just lost power. So it's a bit of a shame but I think, overall, you know, to be on the front row for us here, looking at the whole weekend so far, I think was a good achievement. But of course, I would have liked to go for that final run.

We just heard from Charles that they are struggling a little bit with their tyre degradation. Do you think that that's something he will have an upper hand on them tomorrow?
MV: Last few races we seem pretty decent on the tyres. Because tomorrow again will be very hot, very warm. This track will be quite tough to pass. But let's see. Hopefully, of course, our car will be again a bit kinder on the tyres but bit difficult to tell at the moment.

Carlos, the crowd making a lot of noise for you here. Congratulations, third today, in front of your home crowd. How do you feel?
Carlos Sainz: Yeah, it's been a tough weekend so far. The conditions haven't been the easiest with the heat. with a wind. But today we managed to put a decent lap that allows us to fight from there tomorrow. I think the key will be the start, the tyre management, see if we can get a good start and go from there. But it's a decent position to start.

Small mistake at the beginning of the session. Do you think that cost you a little bit today and do you think you'll be able to fight back in tomorrow's race?
CS: Yeah, I think everything is possible tomorrow. We're definitely going to try our best to get ahead at the start and lead from there. But yeah, it wasn't the ideal qualifying because I couldn't set a good luck on the used tyre. Probably lacking the new tyre for tomorrow for the first stint but I think anything can happen and we will try our best.

Charles, that was a mega final lap in Q3. Many congratulations. After that spin on your first run, just tell us what you were thinking as you started that second lap?
CL: I just wanted to do the exact same lap again without the mistake, because it was already quite a good lap before that. But I over-pushed in Turn 14 and lost the rear. So obviously there's a bit more pressure then. There was a little bit more pressure for the last run, because you know you've only got one chance. But the car was amazing, Very tricky in the high speed and I had quite a lot of moments but apart from that, it was very good for the medium- and low-speed corners. So yeah, very happy with that lap and to have made it work on the on the only chance I had.

That lap was 1.1 seconds faster than you'd gone in Q1 and Q2, where do you find the time?
CL: I mean, Q1 you try to just put a lap in to get to Q2. And then in Q2, I managed to do a lap good enough on the used set of softs of Q1 to go through to Q3. So basically, it was my first lap really with the new tyres. That's why I think there was that much of a jump.

Charles, there was a lot of pressure on you going into that final lap. Of your 13 pole positions, was that the best?
CL: I mean, there were some very good ones in 2019 also. Like Singapore, I remember, was quite a good one. But yeah, I mean, considering all the circumstances and coming to that last run knowing you've only got one chance and with a mistake before, it was a good one. Whether it was the best? I don't think so. But it was a it was a good one.

What about the race tomorrow? How confident are you?
CL: Well, we've done a bit of a long run this morning, which was much better compared to yesterday. Unfortunately, we didn't have any other references because we were the only ones doing long runs this morning. But it feels like we found something. Whether it's going to be enough to challenge Max and Checo, I don't know, but the feeling was better. So this is positive, but I don't know whether it will be enough or not.

Thank you. Well done today. Max, coming to you. That was a very strong first lap from you in Q3, but then you had the problem. Without that power issue was there more lap time in the car?
MV: It's difficult to tell. I mean, a lot of people, of course, improved on the second run, which is quite normal, of course. But yeah, my DRS didn't open. So it felt of course like a loss of power because of the drag. But yeah, it's a shame. Otherwise, of course, you have at least an opportunity to see what you can do, right. But I think overall for us this this whole qualifying and weekend I think it was a bit more difficult for us to really find a good balance in the car. Probably also, you know, they brought updates that probably helped them a bit in a lap time. So for us, not really bringing anything it was a bit a bit more tricky. But, yeah, let's see tomorrow. I think our long runs were quite decent. So hopefully, tomorrow, you know, we can at least be a bit close.

You say it was tricky, Max. But in terms of rule pace, you found good time from Q1 to Q2, and again from Q2 to Q3. So do you feel you've actually improved the car over one lap?
MV: I think we did, at least a bit more stable, bit more balance. So that's good. But of course, still we're lacking. So, of course you always want a bit a bit more. But hopefully, tomorrow is going to be again really hot. So hopefully we can be good on the tyres again.

Another question about the race tomorrow. How important is that run to Turn 1? You took the lead there last year.
MV: It can be important, depends also on your start, right. But it's a very long race, I think many pit stops so a lot of things can happen.

Thank you, Max. Carlos, coming to you. Your best ever start in your home Grand Prix. How good was the car? How good were you?
CS: It was very good. I mean the car had definitely some lap time in it, but I've been struggling a bit with the balance all weekend, getting the high-speed to low-speed balance correct and tuning the car bit to my liking but overall we managed to squeeze in a decent lap at the end of Q3 after fighting the car quite a lot in Q1 and Q2 and I think P3 tomorrow with a long straight here is still a decent spot to start.

What about the track conditions during the sessions? The temperature went up as the session progressed, how did that affect grip?
CS: It did affect it. I've been struggling with a rear all weekend, so higher temperatures and higher wind just means that gets a bit out of place even further, no? And it made my struggles a bit more obvious in qualifying but you know, we keep trying to find things with the set-up. We keep changing the car quite a lot from session to session to try and unlock the pace of this new car and new regulations and, as Charles said, I think we found something in FP3 that could give us a bit of a push for the race.

Looking ahead to the race, it's a long run to the first corner here with a bit of a tow from these two guys. What's possible into Turn 1, and for the rest of the afternoon?
CS: Well obviously try to get a good launch and then it's all about, yes, slip-streaming and braking into Turn 1. I think it will be good fun if we all get there at the same time. But it's what Formula 1 is about, no? These kind of moments that... It makes it fun and I think we could have a good show.

And can we expect more overtaking with these 2022 cars around here?
CS: Actually, following, these last couple of days around this track, has been a bit more difficult than lately. I think it's the heat, and I think it's the tyres that are suffering quite a lot from the heat. So every lap that you do behind the car, it's a lap that you overheat the tyres and you have less grip. So, yeah, it's a very hot Barcelona and it's not going to be easy to pass.