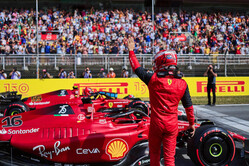 Charles Leclerc strikes again! In very hot conditions and in another closely contested session, the Monegasque ensured that Scuderia Ferrari secured its fourth pole position from the seven races this season, as well as its 234th overall. Carlos Sainz will start right behind him, having set the third fastest time with a fantastic performance on track, matched by equally good work from the pit-wall in making the right calls regarding tyre choice and traffic. This was Charles' 13th pole position which puts him fourth on the list of Maranello drivers, equal with the legendary Alberto Ascari.

Having comfortably got through to Q2, Charles and Carlos started that session on their Softs from Q1. Leclerc posted a good 1'19"969, while Carlos stopped the clocks in 1'20"386. The engineers and Charles then decided to run the risk of him staying in the garage - the only driver to do so - thus saving a set of new Soft tyres, to give them more strategy options for Sunday's Grand Prix that starts at 15 CEST. However, Carlos went back on track on new tyres, easily getting through to the final phase with a 1'19"453.

In the final fight for pole position, the Ferrari pair each had two sets of new Soft tyres. Carlos's first run produced a 1'19"423. Charles was on a quick lap but spun at the chicane before the final corner, flat-spotting his tyres. He headed straight for the pits and went out again on new Softs, brushing aside the incident on his previous attempt. The team chose the ideal moment to send him back out on track and he paid them back with a fantastic 1'18"750, making him the only driver to get under the 1'19" barrier. It was three tenths quicker than second placed Max Verstappen. Carlos also improved, getting down to an excellent 1'19"166, just 93 thousandths off second place. Tomorrow's race looks like being very close, but the F1-75 in the hands of Charles and Carlos seems capable of fighting for the win and Sainz's third place on the grid is not necessarily worse than starting from second on the front row. It looks like being yet another thrilling contest, which has been the case so far this season.

Charles Leclerc: We really turned things around since yesterday and our team did an amazing job. We struggled a lot in the first two practice sessions this weekend, especially with the tyres. We analysed all the data and made significant changes to the car last night. We saw some improvements this morning when we did a long run and hopefully it will be enough to beat our competitors who have had an advantage in this area for the past two races.

As far as qualifying goes, it was a tricky session. I think that my first lap in Q3 was great until I pushed a little too much in turn 14 and lost the rear. I had just one shot to bring it home after that and I'm very happy with my lap and our performance in general.

Carlos Sainz: Overall P3 is a decent result for tomorrow and we feel positive for the race, as the upgrades seem to be working well. We still struggle a bit with the rear being very light in this car, so I'm not driving it exactly the way I would like to. However, we still managed to grab P3, which is a good position to attack tomorrow. We'll give everything from there to fight for the win!

A big thank you to the mechanics for their hard work overnight to change the chassis and also to every fan out there in the grandstands for their incredible support. Let's race tomorrow!

Laurent Mekies: There were several positives to take from today, first and foremost Charles' qualifying, which I think was simply amazing. Already on the lap on which he spun, he looked to be on course for pole position and afterwards, he did very well to keep calm and concentrate, putting together a fantastic lap.

Carlos also did very well. He has been quick all weekend and this afternoon, he was on the pace, just missing out on the front row by less than a tenth. We expected it to be a very close competition with our main rivals as usual and so it was, with Verstappen qualifying between Charles and Carlos. Another positive aspect was that the risk we took with Charles in Q2 paid off as it gives us greater flexibility tomorrow in terms of his strategy, with an extra set of new Softs. Well done also to the team, who worked late into the night to fix the problems on Carlos' car and to everyone in Maranello for their efforts in fine tuning the updates introduced at this race. They worked, although we believe it will take a few more races to get the most out of them.

We can be happy with how today went, but we are not getting carried away when it comes to tomorrow's race. It's possible our rivals could be more competitive tomorrow than they were today and I think that any aspect, from the start to tyre degradation, which will probably be the highest we have seen so far this season, could make the difference.