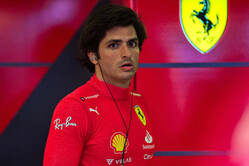 Whilst Ferrari believes that Red Bull's development programme will eventually be halted by the budget cap, the Austrian team points to the cost of Carlos Sainz' crashes.

Of those drivers who have contested all five races thus far, Carlos Sainz has the worst possible record in terms of consistency having only made it to the chequered flag on three occasions.

Of the 285 racing laps thus far, the Spaniard has completed just 165 (57.9%) after crashing out in Melbourne on the second lap and crashing again on the opening lap of the subsequent race at Imola.

With the title fight likely to go all the way down to the wire, Ferrari has already suggested that Red Bull's intense programme of updates will eventually be compromised by the budget cap, while Helmut Marko is confident that Sainz' mishaps will similarly affect his team.

Asked if Red Bull has spent more of its budget in the opening races compared to Ferrari, the Austrian outfit preferring a steady flow of upgrades while its rival opts for full packages at regular intervals, the Austrian tells Motorsport-Total.com: "I don't think so.

"It's true that the increased logistics costs are a problem," he continues. "But it's not just us, it's Ferrari and all the other teams.

"We plan our updates in such a way that we always lose weight with each update, because unfortunately we still haven't reached the minimum weight. And we won't quite reach it with the next update either.

"I don't think we are in a significantly different position to Ferrari in this respect," he adds. "Especially as I wonder what effect it has on them that Carlos Sainz has already crashed the car several times.

"It can't be cheap," he concludes.