Teams satisfied as Ferrari is cleared of testing rules breach 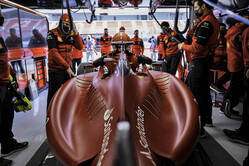 Following the FIA's dismissal of claims that Ferrari breached the testing rules at Imola, the teams say they are satisfied with the way things were dealt with whilst insisting on the need for transparency.

The Italian team only took part on one day of the two-day test that followed the Emilia Romagna Grand Prix, however both drivers, Charles Leclerc and Carlos Sainz were on duty.

It was subsequently claimed that the Italian team breached the regulations by running two different floors over the course of the day, even though the tests are intended purely for tyre testing and not for the purpose of the teams gathering information on their own cars by trialling new components.

To that end the changes teams can make to their cars over the course of the test are strictly limited. Indeed, the cars must only run to a spec that has been previously used, either over a Grand Prix weekend or in testing while set-up changes can only be made with official approval.

While it was alleged that Ferrari tried two different floors, one team having sought clarification from the FIA, it was later confirmed that the floor in question had been previously used in pre-season testing.

"Ultimately it's up to the FIA to police, because the understanding of the regulations regarding tyre testing is you have to run in a fixed format of car specification," said Christian Horner when asked if he was satisfied with the FIA's explanation and whether there remain any lingering concerns that teams might exploit the regulations to use the tests to test different components.

"If you need to replace a part, it can only be to an older specification of part that's previously run," he continued. "I think the excitement about the Ferrari floor was it appeared to have... it was certainly different between the morning and the afternoon and appeared to have some new components. However, the FIA have subsequently confirmed that Ferrari ran that floor in pre-season testing, so therefore it complies."

The rules overhaul has left the teams desperate to acquire as much data as possible, especially in light of the porpoising issue that only came to light once the cars hit the track.

Consequently, it is understandable that teams might try to use the tyre tests for their own purposes... if you'll forgive the pun.

"It's for the FIA to do that police work and due diligence," said Horner. "What we certainly want to avoid is, because these cars are so immature, it's still very early in their development stage, that tyre tests don't turn into aerodynamic or performance development tests. That is not the purpose of those tests."

"I've seen, obviously, the tweet with the two pictures," said Toto Wolff. "But the FIA just needs to be on top of these things. It can't be that any team runs a component in an environment it shouldn't be doing. And I guess if the FIA was not 100% on it, I'm sure they will be now."

"I've heard the story," added Zak Brown. "I think what's important is that we do have total trust in the FIA to police the sport, whether it's at a test or a race weekend.

"But then, we also need total transparency," he continued. "It's been suggested - or so I've heard - that maybe it was on an older floor. Maybe that was the case. But I think what's important is that if that's the case, demonstrate that to the teams. Just give us confidence that it's been policed appropriately, and total transparency.

"We've had in the past, not long ago, an engine violation a few years back, and then there was a significant fine," said the American. "We don't know how much and we also don't know exactly what was done, and I think in today's day and age, total transparency will help the sport understand what happened, why it happened, and what's been done about it."

"But at the end of the day, all we need is transparency. We need to know if there was something wrong or not. And if there is, what's the outcome? That's it. All we need is transparency. I wouldn't point fingers at a moment. I don't know. But really, the most important thing is that we leave that under a veil and then we don't know what's going on."