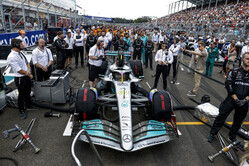 Lewis Hamilton has defended his decision not to make a late pit stop, the seven-time champion admitting that it felt like a risk too many.

When teammate George Russell finally made his sole pit stop on Lap 40, under the safety car, now on fresh mediums he was soon able to reel in and subsequently pass his Mercedes teammate, both subsequently benefitting from a mistake by Valtteri Bottas.

With the safety car still on track, Hamilton was asked if he wanted to make a second stop, having switched from mediums to hards on Lap 22.

Speaking after the race, the Briton explained his call.

"When you're out there you don't have all the information," he said. "You don't know where everyone is, where you'll come out, you don't have the picture they have on the screen.

"Either way, we've just been unfortunate with the timing of the safety car today."

"Strategy has not been kind to me," said Hamilton in a radio message to his team.

Speaking after the race, while praising his teammate's performance, Hamilton said that like his teammate he too should have started the race on hards as opposed to mediums.

"He did a great job to recover from that position and get the points," he added, "fifth and sixth is good points today for the team."

Asked if he needed a change in luck, he replied: "Yeah, I'm waiting for it. Until then I'll keep working as hard as I can, working with the team. We got good points as a team today."