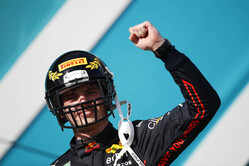 It's three wins from three race finishes for Red Bull's Max Verstappen: he claimed the inaugural Miami Grand Prix from third on the grid with just one pit stop from the P Zero Yellow medium to the P Zero White hard. Ferrari's Charles Leclerc and Carlos Sainz finished second and third on a similar strategy. All three podium finishers received a special Pirelli American Football helmet at the prize-giving ceremony held in the iconic Miami Dolphins stadium.

A two-stopper was expected as the quickest strategy before the race, but the drivers managed to stretch their opening stints on the medium tyre - which most chose to start the race - without compromising performance, so that they could then run on the hard tyre all the way to the finish. An alternative approach was adopted by Mercedes driver George Russell, the highest-placed of just four drivers to start on the hard. He switched to the medium after 40 laps to finish fifth from P12 on the grid.

As hoped for by many, a Virtual Safety Car and then Safety Car period towards the end of the race created opportunities by allowing drivers a 'cheap' pit stop, and several took advantage to change onto fresh tyres. These included Russell and Red Bull's Sergio Perez, who finished in fourth as the best-placed two-stopper.

Temperatures were still warm for the race but not quite as hot as they had been for the previous days: the grand prix got underway with 34 degrees ambient and around 48 degrees on track. There was a high degree of humidity and some risk of rain predicted, but this never actually materialised.

Mario Isola: "A strong performance from the tyres here, which meant that the race gravitated towards a one-stop strategy, whereas we had previously anticipated a two-stopper. This was also thanks to the fact that temperatures were notably cooler today compared to previous days. The teams were able to stretch their first stints, probably in the expectation of a safety car or other opportunity, but in the end that only came towards the end of the race, after nearly everybody had stopped. A few drivers tried to take advantage of that by changing tyres, with three drivers running all three compounds during the race. However, Verstappen and Leclerc fought hard for the race win and fastest lap even on used hard tyres in the closing stages. It was an exciting finish to an eagerly-anticipated grand prix: we hope that all the podium finishers enjoyed their special Pirelli American Football helmets!"