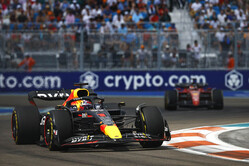 Sometimes, just sometimes, the hype is justified, but most of the time it isn't.

For much, indeed most, of the coverage this weekend it has felt as though we, the fans, are at the receiving end of a very hard sell, constantly told how great it is and how much better it is going to be.

Of course, as is ever the case, those doing the selling have good reason, Liberty Media in terms of convincing a potential buyer of the sport that F1 is a solid gold investment, and the media in terms of justifying their massive investment... not to mention the need to do as instructed by their masters.

Added to that, of course, is the fact that as co-promoter of the event, Liberty has a lot at stake, more so when you consider that it is also co-promoting next year's race in Las Vegas.

While that $240m land grab in Vegas might signal commitment, should things go t*ts-up it shouldn't prove too difficult to off-load, though there is also the potential for an F1 Hotel and Casino should the 'boom' prove true.

Be it the hard sell behind movies, bands or TV shows, eventually, when push comes to shove, it is the public that decides and over the next couple of hours, once the race is fully in the spotlight and the 'celebrities' and their razzmatazz are demoted to a secondary role, we shall get to see if F1's latest addition lives up to the hype.

What might appear thrilling in sixty second visual bites in Drive to Survive or the adverts broadcast ahead of the race, will surely lose some of the attraction if viewers are subjected to a couple of hours of follow-the-leader with endless safety cars and drivers unwilling to go offline in a bid to overtake, the winner decided purely on pit strategy, reliability or luck.

Those endless camera shots of the crowd whooping with delight at every move could soon dry up should endless delays cause some to fall asleep in their very expensive grandstand seats.

The big fear, is that in going along with this, F1 is at risk of selling its soul, losing more fans than it can possibly win over... long-term fans as opposed to those simply following the latest 'in-thing'.

Still, one can always go look at the Mermaids.

Before the race has even begun there is already talk of changes to the track for next year, as the drivers complain about the track surface and the Micky Mouse layout. Surely, it's never a good sign if there are complaints before the product has even been sampled.

In many ways today's race is a lottery, and that's without the threat from the Weather Gods.

Most drivers have little to no experience of high-fuel running here, and with the fears over overtaking it is likely that it will all come down to strategy.

As ever, the race can be won - or lost - at the first corner, and one has the distinct feeling that it may take several attempts before the field gets it right.

Pirelli admits that strategy is a really tough one to call, and this is for a number of reasons. Firstly, there's no previous race data, while every practice session so far has been interrupted by red flags, and the weather ranges between extremely hot and very humid, on a track surface that is still evolving.

It's likely to be a two-stopper (with a one-stopper looking marginal) and what's mainly going to influence that is the amount of tyre wear.

With several drivers having visited the wall already it also seems likely that we will see a safety car at some point.

As drivers no longer have the obligation to start on the tyres with which they set their fastest Q2 time, the most flexible option will be to begin on the medium and then go onto the hard, which leaves the possibility open for a final stint on the medium again, or even the soft tyre if the last stop is close enough to the end of the race.

Charles Leclerc has looked strong all weekend, while Carlos Sainz has to be due good result. On the other hand, at Red Bull, Max Verstappen doesn't appear entirely confident about reliability... and who can blame him.

There is talk of rain, but that aside, despite the glitz and celebrity glamour, most drivers will be happy to come out of the other side of today's race unscathed. Despite the talk, despite the media hype, the sport really doesn't appear to have learned from the lessons of its past as far as American tracks are concerned... and you know what they say about those who do not learn from the past.

While Miami, and Vegas, will appeal to the Netflix fan, there are plenty of real American race circuits that appeal to old-timers and the vast majority of the drivers.

The pitlane opens and the drivers begin to emerge from their garages. All but the Aston Martin pair that is. Indeed, Vettel and Stroll fail to get out before the pitlane closes due to a fuel temperature issue and as a result both will start from the pitlane.

All are starting on mediums bar Stroll, Russell, Vettel, Latifi and Ocon who are on hards.

They head off on the formation lap, all getting away.

As the grid forms, Verstappen hangs back. The Aston Martin pair wait in the pitlane.

Great starts from Leclerc and Verstappen, and as the Monegasque leads the field into Turn 1, the Red Bull is alongside the second Ferrari. The Dutchman goes around the outside of the Spaniard who eventually falls into position ahead of Perez. Behind, Hamilton and Gasly are side-by-side as are Norris and Alonso. As Gasly pulls away from Hamilton, the Briton, having locked-up finds himself being challenged by Alonso, with Norris in hot pursuit. Indeed, the Spaniard gives the Mercedes a little nudge as Hamilton recovers from his lock-up, subsequently passing the wobbly Mercedes.

Further back, Hamilton locks-up and to add insult to injury is clouted by Alonso.

On Lap 3, Hamilton sweeps past Alonso to retake the place he lost at the start.

As DRS is enabled, Leclerc and Verstappen trade fastest lap times. Perez is all over the back of Sainz.

As he suffers another lock-up, Hamilton fears he has damage to his left-rear from the earlier clash with Alonso.

Despite his problems, Hamilton passes Gasly for 6th. Further back, Schumacher and Tsunoda are enjoying a great scrap for 10th. The German passes the AlphaTauri and teammate Magnussen follows through.

Verstappen is advised that Leclerc appears to have damage to his front-right.

At the start of lap 9, Verstappen nails his nemesis going into Turn 1, the crowd roars. The sheer straightline speed of the Red Bull means Leclerc is unable to offer any resistance.

"Daniel, do you think we can do Plan A, Plan A," Ricciardo is asked. "At the moment, yes," comes the reply.

"We are extending this stint as much as we can," Sainz is advised.

Magnussen passes his Haas teammate for tenth, as Russell passes Albon for 13th.

On lap 11, Tsunoda makes the first scheduled stop pf the afternoon. He rejoins in 19th position.

A lock-up, due to his front-right tyre wear, sees Leclerc drop 2.5s behind Verstappen.

Magnussen pits at the end of lap 12, rejoining in 18th following what was a slow stop.

Russell passes Ricciardo for 11th as his Mercedes teammate closes on Bottas.

"We are planning to go to Plan B for Delta," Leclerc is told.

Schumacher pits at the end of lap 14. He rejoins in 18th behind his Haas teammate.

"You can push these tyres as hard as you like now, temperature are under control," Russell is told.

A slow stop, due to a right-rear issue, for Alonso who rejoins in 13th just ahead of the DRS train led by Stroll.

Vettel and Latifi are side-by-side as they battle for 15th. The Canadian is no match for the 4-time champ, with Magnussen following through.

"Kev, we need to get past these guys," Magnussen is told of Vettel and Stroll.

Norris pits at the end of lap 18, while Albon complains that "these tyres are worse".

Norris rejoins in 12th in the midst of the Vettel/Magnussen scrap. On cold tyres he falls behind the battling pair.