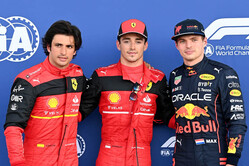 Charles, you've had an amazing weekend so far, how does it feel coming off of Imola where you had a little mistake but this weekend you're commanding it and the fans are loving it?
Charles Leclerc: The fans are crazy. It's incredible to be here in the US and to see how much the sport has grown over the past few years and to see so many people in the grandstand. It definitely motivates us. And there are also a lot of Ferrari fans. So it's amazing. The last weekend hasn't been great for me, I did a mistake in the race. But today went well. So we're starting on pole and we need to finish the job tomorrow.

A lot of straight line speed here. DRS is going to come into play, Red Bull is really good in a straight line. Are you worried about that?
CL: Well, yeah, they are extremely quick in the straight lines. We are quick in the corners, and it will be a tight challenge tomorrow. And hopefully we'll come back on top.

Carlos, what a comeback. High five. Good job. That was an incredible run. How did you turn it around this weekend?
Carlos Sainz: Well, just building a bit from a pretty heavy crash yesterday. It wasn't easy at all to get the confidence back in such a difficult circuit like this new one in Miami. But yeah, kept it cool until Q3. I think I pulled out a couple of good laps. Not quite enough for pole position, but given from where I was coming yesterday, I will take it.

What do you think you have left to improve on so you can get a victory tomorrow?
CS: Tomorrow? It is going to be I think an interesting day, with everything that's going on this weekend. I haven't done any long runs yet. I haven't put the fuel on the car and tried it. So tomorrow the laps to grid will be the first time to have a feel, which could be quite challenging. But at the same time, I'm feeling confident with the car. The car is really good to drive around here. So I think we can do a good job.

Max came up a little bit short. But on the other hand, you've also had a little bit of a rough weekend. You didn't have very many laps in P2, do you think that attributed to not being able to get the pole today?
Max Verstappen: Yeah, I mean, overall I'm of course pretty pleased with qualifying. I literally did four or five laps yesterday. So the whole day today we were still trying to learn to track trying to find a decent balance in the car. And actually to be that competitive in qualifying I was a bit surprised. Because it's not an easy track to learn. And yeah, I think overall… Of course, you want to be on pole, but from where we come from I think we did a really good job. But yeah, we have to start making the weekends, you know, less difficult because like this, you know, it's always going to be tricky. But we have a good chance for tomorrow. We have good top speed. I think the car is handling quite well. So I'm looking forward to that.

Drivers have complained a little bit about it being so dirty offline and that it's going to be difficult to pass. You have a couple of cars to get by, where do you think you're going to be able to do that?
MV: Yeah, exactly. It's quite slippery outside of the normal racing line. But we'll see. A lot of things can happen tomorrow. I think it's going to be even warmer than today. So it also depends a bit on how the tyres are going to behave.

Welcome to the top three finishers in Qualifying for the 2022 FIA Formula 1 Miami Grand Prix. In third place, Max Verstappen. In second place Carlos Sainz and taking the 12th pole position of his career and his third of the 2022 campaign, our pole-sitter Charles Leclerc. Many congratulations Charles. Tell us what a pole position lap around here feels like.
CL: Tricky, very slippery. It's a sliding all around, a bit everywhere, and it is very, very difficult to put everything together because as soon as you get out of the line a little bit you are you lose a lot of grip and a lot of lap time. So the lap wasn't perfect, but yeah, good enough to be on P1. The car was amazing today, and hopefully we can keep that pace for tomorrow.

You were fastest in all three segments of qualifying. The car has performed on every racetrack we've been to this year, just how much confidence do you have in it at the moment?
CL: A lot. It is a very strong package that we have. It works in more or less every conditions since the beginning of the season. So that is a good sign for the future. But yeah, as I've said many times, I think the upgrades this year will be very, very important. We've had a few here, which went in the right direction. And hopefully we'll have some more during the season to stay on top.

Okay. Carlos, happy to finish in the same position tomorrow?
CS: Happy to be where I am today after where I come from. But at the same time, obviously, tomorrow, you never know what can happen especially at this track. I think we found a track that is very unpredictable, very slippery, very easy to do mistakes. So yeah, anything can happen tomorrow. And it's a good day to try and go for it, for sure.

Can you just tell us what happened on that final lap? Because you were up until the third sector?
CS: Yeah, no, it was a pretty good lap but I'm still pushing a bit over, like on the limit, you know, to try and find the right way to drive this car and the balance, but up until that corner, everything was going well then I tried a bit of a different line in last corner. Because I was struggling through the whole qualifying I was losing a 10th or so there to Charles, but I didn't make it any better by doing what I did in the last lap. But I had to try something different because I was losing always there and it didn't go in the right direction. But I know what not to what not to do tomorrow.

And what do you feel about the overtaking opportunities here?
CS: I think overtaking is possible with all these three long straights, but at the same time, all drivers complained about the lack of grip that there is offline, so if you're going to make a pass, you need to make it stick fairly early into the braking. If not, I struggled to see ourselves doing any late moves or lunges from far behind, because there's very little grip. Even at the start it could be very tricky on that inside line, and that outside line of Turn One. From here, I think we've asked the FIA to make sure that the track is as clean as possible for that start because we could see mistakes coming from drivers that really have no blame from it - because it's basically like driving on a dry line and out of the line is feels like it's wet - so we need a bit of help there from the race direction to help us.

Max coming to you. Can we just pick up on that? What are your thoughts about the start tomorrow? Being P3 and grip level…
MV: I haven't even done a start so I don't even know how that's going to go!

But in terms of grip levels, do you think there's a big advantage being on the racing line?
MV: I don't know. I haven't seen any other starts and I honestly cannot tell you because I haven't done a start on the left side or on the right-hand side, so… yeah. I mean, that just sums up my weekend: it's just been incredibly messy. We just make it super difficult for ourselves. Basically no… well, four or five laps yesterday, then you start today still learning the track, try to find a setup because yesterday you have no clue what, of course, works, because there's not really a lot of data to look at. And I'm of course still pleased to be in third position and actually be very close to the guys next to me but yeah, I think we can do so much better by just actually operate a bit cleaner and smoother.

But Max, given everything you've just said, how good was the car today?
MV: Yeah, the car was fine, with the limited information we could gather. And yeah, in qualifying, up to a certain point it was fine but then to actually really go to the limit and try to find a bit more time… for me, Q3 I was still figuring out a lot of things in terms of braking and brake shapes and all these kinds of things, to try and be faster. But I think overall the car is competitive. We have good top speed again, I hope that is something which can help us tomorrow.

And does this Ferrari front row lock-out make the race that much more complicated for you tomorrow?
MV: Well, naturally there are two cars in front of you at the moment. So, it will make it in general a bit more difficult even, let's say, if you have more pace, but you know, it's a new track. So, we don't really have a lot of information. It's going to be super warm tomorrow. So you also don't know what's going to happen with the tyres entirely. Because I think, all of us, we don't really have a proper long run. So, there's still a lot of question marks. But of course, I would have preferred to start a little bit ahead.