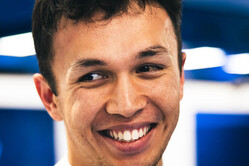 In an eleventh hour reaction to Lewis Hamilton's stance on bling-gate, FIA race director Niels Wittich has sent out a flurry of notes to teams as the grid is completely reorganised ahead of today's Miami Grand Prix.

On the other hand, Carlos Sainz will still start from second due to the fact that the guy needs a break.

Max Verstappen drops numerous grid positions in late payback for the events in Abu Dhabi, while Sergio Perez starts from the pitlane as a result of Christian Horner appearing to become a full-time member of the Sky F1 commentary team.

Valtteri Bottas will not face any penalties, for although the FIA is convinced the Finn must be breaking numerous rules, leaving him at the front end of the grid while demoting Lewis Hamilton will seriously p***-off the seven-time world champion whose grid penalty, the result of his jewellery, tattoos and all-round dress sense, is worryingly similar to that of the dark old days of engine grid penalties.

Pierre Gasly loses five grid places and gets a reprimand for being French, as does Esteban Ocon, while Lando Norris forfeits ten places and is handed 25 penalty points on his licence for being popular with the ladies.

Yuki Tsunoda is another driver to escape punishment, mainly because officials can do without all the screaming, while Lance Stroll and Nicholas Latifi are both punished for being the sons of billionaires.

Fernando Alonso will start from near the back simply because his fight back through the field will be one of the afternoon's few highlights, while George Russell takes a 5-place hit for appearing to be a nice guy.

Sebastian Vettel is penalised not so much for his secret gold tooth - which he is unwilling to remove - but for the fact he is increasingly resembling Shaggy from Scooby Doo.

Daniel Ricciardo... well where do you start... 5 grid places at least according to the race director.

Mick Schumacher is promoted up the grid in respect of his legendary father, while Kevin Magnussen also moves to the front in a bid to assist his Haas teammate and being a sloppy old so and so when it comes to his wedding ring.

Guanyu Zhou will not be allowed to start today's race, or indeed any race, until there is a firm ruling as to whether it's Guanyu Zhou or Zhou Guanyu.

Finally, Alex Albon will start from pole, not so much due to the penalties handed to his rivals but because he is a cat lover... and that's good enough for us.