Verstappen refusing to get side-tracked by off-track demands 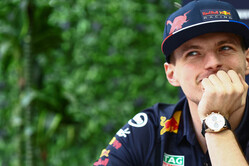 Though aware of his popularity with fans and the media, Max Verstappen is determined not to let off-track commitments compromise his championship bid.

With the gradual relaxing of the various protocols put in place during the pandemic, drivers are finding themselves increasingly in demand from the media, sponsors and fans.

Traditionally, the visit to Melbourne has involved trips to the sea or animal sanctuaries for photo-ops, and this year hasn't been any different.

However, the world champion fears that the more time spent on such activities detracts from his preparation for the job in hand... securing his second title.

"Even if there is no COVID for sure I'm not going to do more on weekends because I'm there to race, I'm not there to entertain the crowds," said the Dutchman, according to Reuters.

"I'll entertain them by doing that on the track," he continued. "Otherwise you get upset, you don't feel good and it's going to hurt your performance.

"So you need to just keep it exactly the same, the same approach as other race weekends."

Verstappen recalled the enormous pressure on (then) teammate Daniel Ricciardo when he visited his homeland for the race.

"I always felt sorry for him because he was always so busy," admitted the Dutchman. "He actually never really got to fully enjoy it.

"Maybe he manages it differently now but I remember when he was here it was tough, he was super busy in the week leading up to the Grand Prix. So I hope for him that at least he can enjoy it a bit more now because I think it is very special to have a home Grand Prix."

Of course, last year Verstappen finally got to experience the pressure of a home Grand Prix, and when he returns to Zandvoort this year, as the country's first ever Formula One world champion, the demands on him will be even greater. However, he is confident that he will still be able to manage his schedule.

"You need the right people around you as well to manage you in that," said the 24-year-old. "Of course at one point as a driver you know what you need to feel good in the car and you really know how many commitments you can do on a weekend.

"But you should be able to say 'no' to certain commitments. At the end of the day you are here to drive and to race because that's what you live for and what you get paid to do."