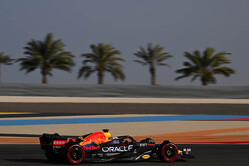 Red Bull has confirmed that both Max Verstappen and Sergio Perez suffered a fuel pressure issue that caused their retirement from the season opener.

Already handicapped by a steering issue and overheating brakes, despite trying to hand on for second, the world champion was told his car had suffered a critical issue with just four laps remaining.

Then, on the penultimate lap, teammate Sergio Perez began to suffer a similar problem, the Mexican spinning out at Turn 1 on the last lap after his engine locked-up.

As the Saudi Arabian Grand Prix weekend got underway in Jeddah, a spokesperson for the Austrian team confirmed the cause of the double-DNF.

"Both cars suffered from a lack of fuel pressure last weekend," they said. "The correct amount of fuel was in both cars, but a vacuum prevented the pumps from drawing fuel and delivering it to the engine.

"We've taken the necessary steps to correct this and we expect no problems this weekend," they added.

Speaking after last Sunday's race, which witnessed his team's first double-DNF since Austria 2020, team boss, Christian Horner said: "I can't remember the last time that happened to us, but it's obviously your worst nightmare.