Domenicali seeks to address 'dramatization' of Drive to Survive 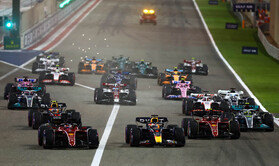 F1 boss, Stefano Domenicali is to hold talks with Netflix aimed at addressing the increasing amount of 'poetic licence' involved in its highly popular Drive to Survive show.

One of the main complaints against the show has been the desire to create controversy where there is none, one example being the portrayal of Carlos Sainz and Lando Norris' relationship at McLaren having been intense and fractious when it was anything but.

Other examples have been added 'fake' dialogue and the showing of scenes out of context in a deliberate attempt to suggest intense rivalry and drama.

Indeed, the manipulation of events has led to complaints from a number of drivers, not least Max Verstappen who refuses to have anything to do with the documentary.

Speaking in Bahrain, Stefano Domenicali revealed that he is to talk to Netflix bosses to address the situation.

"There is no question that the Netflix project has had a very successful effect," Motorsport quotes him as saying.

"However, in order to ignite the interest of a new audience, a tone was used that in some ways focused on dramatizing the story," he continues. "It's an opportunity, but I think it needs to be understood. We talked about it this weekend at a meeting with the teams as well. We will also talk to Netflix, because it is necessary that the story does not move away from reality, otherwise it no longer fits."

Of course, the criticism comes after the series has appeared to do its work, Drive to Survive credited with bringing a whole new generation of fans to the sport, particularly in America.

Indeed, the success of the series can be measured not only by its viewer numbers but the fact that the 2021 United States Grand Prix, which saw around 400,000 fans pass through the turnstiles, is regarded as the best attended F1 race in the sport's history.

Only yesterday, ESPN reported record viewer numbers for last week's season opener, with an average of 1,353,000 viewers tuned in to its broadcasts, the previous high being 1.2 million for the 2021 US GP.

Referring to Verstappen's refusal to participate, Domenicali believes that Netflix should talk to the teams and drivers in order to create a show that has the approval of all participants.

"A driver who refuses to participate because he feels he is not being represented in the right way is not being constructive," says the Italian, "so a dialogue is needed to understand how he can be included in a format that he feels is correct.

"It is a topic that we will address together with the drivers. We have to make sure that a project that has generated such exceptional traction has a language that continues to appeal, but without distorting the image and the meaning of the sport that we live with every day."