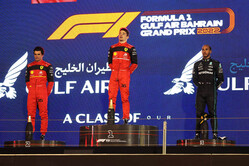 Charles congratulations pole position, fastest lap, victory, driver of the day, what a dream start to the season.
Charles Leclerc: Yeah, so happy. I mean again I keep repeating myself but the last two years have been incredibly difficult for the team and we knew this was going to be a big opportunity for the team and the guys have done such an incredible job giving us and building this amazing car. So for now it's starting in the best way possible: pole position, victory, fastest lap, one-two today with Carlos, we couldn't hope for better. So yeah, thank you to all of you guys that kept supporting us in the past few years. It hasn't been easy but it's incredible to be back at the top.

Now Max had tremendous straight line speed down the pit straight to overtake you and then you were very aggressively coming back at him. It was really exciting to watch.
CL: Yeah, I was trying to be as clever as possible using the DRS as much as possible so I was trying to break early into Turn 1 just to be behind him at the DRS detection and twice it worked out, so I took back my first position and just incredibly happy that we made it work.

Did your heart sink a little bit when the safety car came out? Were you thinking 'not now'?
CL: I didn't want it now but then I did a great restart. And then that gave me a little bit of margin to then manage my race until the end.

Carlos, congratulations. Tenacious as ever and you are rewarded with second place and a one-two for Ferrari.
Carlos Sainz: Yeah, well, first of all, congrats to Charles, congrats to Ferrari. Ferrari is back and it is properly back, no, with a one-two and where the team should have been over the last two years but the hard work is paying off and we are there. For me it's been a very tricky weekend, I'm not going to lie. I didn't have the pace today. But I managed to hold in there and bring the one-two for the team. I have some homework to do over these next few days and I'm sure I will come back stronger.

You are being quite hard on yourself. But when did you realise you might be getting past Max? Did you sense that he was driving a wounded car.?
CS: At the restarts, I had a good, strong chance because I had a very clean restart behind Charles and Max. He defended well, to be fair. And then suddenly I started seeing some flashing red lights on the back of his car. And I said 'okay, this is my chance' and I went for it. He was unfortunate. I think today he was driving well enough to get P2 but yeah, I had a good run on him and then he had to retire. So it's what it is. And it's good for Ferrari.

Lewis, still you rise. You didn't have the ultimate pace today for you still managed to get up on the podium.
Lewis Hamilton: Yeah, firstly, a big, big congratulations to Ferrari. So happy to see them doing well again. They are such a historic, epic team. So it's great to see them. It's great to see Carlos and Charles up there as well. So congratulations to them. I think yeah, it was such a difficult race, we struggled throughout practice. This is really the best result we could have got and of course it was unfortunate for the other two drivers. But we did the best we could and we're grateful for these points.

And have you got lots of new parts coming for this Mercedes W13 where you can get up there on that leading pace?
LH: I'm hoping! I know the guys are working really hard back to the factory and it's not going to be a quick turnaround, but I know that... we all know as a team, I do feel like we've been the best unified team for so long. I know that we all know that just keep your head down, keep working. There's a long, long way to go.

Great damage limitation today so you're going to go to bed satisfied tonight I think.
LH: For sure.

The dream start for your Charles: pole, victory and a Ferrari one-two, just how good does this feel?
CL: It feels amazing. Obviously, after yesterday, it already felt great. But yeah, we had to finish the business today and we did a one-two. So it's the perfect start to the season. And I'm incredibly happy after the last two years that have been very difficult for the team, for myself, for, obviously, Carlos also last year. We had to work extremely hard. And we did work hard and well. And yeah, to finally prove that all the work that we've done in the past two years is paying off, feels amazing.

And does this make up for the disappointment of 2019 at this race?
CL: Yeah. It feels good. I did a bit of a joke on the radio on the last lap, saying that there was something strange with the engine, which gave a heart attack to some of the engineers I'm sure, but everything was fine. So yeah, very happy that this time we brought it home.

Now we saw some great racing between you and Max after the first pit stops. Can you just talk us through it? How enjoyable was it and also how easy was it to follow one another?
CL: Well, I only followed into Turn 2, because I was always behind only for one corner and would Max back into Turn 4. But it was tricky. It was nice though. It was on the limit, hard racing. But we will always give each other space, which was nice, and following him into Turn 2 was actually a bit more predictable than what I expected or what I had last year. So this was good. But it was always very close. I would always try and brake very early into Turn 1 to get the DRS for Turn 4 and it worked out three times in a row. So then I could keep my lead. And it was always also very tricky because I was struggling quite a lot with my energy and had to manage that too. But then after the third lap, I think I was in a better window with it and could push again and manage to have a bit of margin to manage my race.

Well Charles, it was very entertaining. And well done to you today. Carlos, let's come on to you. Great job by you as well. Your seventh podium in Formula 1 and your best result since Monaco last year. First up, how do you feel?
CS: I feel great. I'm particularly happy for the whole team. It's massive, you know, after two difficult years to be back and be on a one-two, it shows that all the hard work has just paid off and that we are back in the fight, back to where Ferrari should be, and congratulations to Charles because I think he drove a really good race. And he's been on it the whole weekend. So to bring home this one-two means a lot to all of us and to all the tifosi and for sure today, we need to celebrate because it's a huge day.

Now, how good was your car feeling during that safety car period? Do you think you could have passed Max Verstappen if he hadn't had a problem?
CS: It would have been very tricky. I had a run at him into Turn 1. But they seem to have very good top speed. And I never really quite got ahead of him. But I gave it my best shot. He defended very well to be fair, and then it was going to be tight because I was on the limit of the DRS zone. I think if I would have kept the DRS then I would have given him a run. And then he started facing the problems that we saw. And in that sense, I guess I could be lucky that I could pass him and then finish P2. But he has been driving also very well all weekend so it's tough to see. But at the same time we've also done a very good job in reliability, it also counts.

Well done Carlos, Lewis, coming to you now. Fifth to third. The 183rd podium of your Formula 1 career. What were your expectations coming into this race?
LH: Well, firstly, big congratulations to these guys. It's great to see them up here. It's a lot of red. But really happy to see these guys shine and be back up there. It's you know... With the national anthem, also just the team and the energy that they always bring. It's nice to see. I know they had a difficult year last year but they kept pushing, so it's great to see them back. But I hope that we can get in the battle with them at some stage. I had a moment where I thought for a second that I was going to have a little bit of a battle with Carlos but it was only for five laps and then after that they were gone. I definitely didn't expect to be up here. Of course I woke up this morning and I was hopeful and we did everything we could, praying as hard as we could to get the best results, but ultimately it came down to just really hard work from the whole team both here and back at the factory. We have a lot of work to do. We have quite a big deficit in performance but this is a great start still.

You say you have a lot of work to do. But what did you learn about your car doing a race distance this evening?
LH: Oh, well one, we've got a reliable car and two they're much faster. But we kind of knew that already.

Do you think you'll be more competitive in Jeddah next weekend on a slightly smoother circuit?
LH: No, I don't think so. But of course we've learned a lot from this week. Their straight line speed as well as the Bulls were very quick in a straight line and their performance through corners is quite a bit different to us. So the car was very hard to drive but it could always be worse. So I'm hoping for the next race we manage to find some improvements but it's a fundamental issue that's going to take a little bit longer I think to fix.