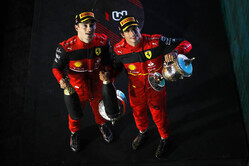 Ferrari's Charles Leclerc led a Ferrari one-two from pole using a three-stop strategy in Bahrain: two initial stints on the P Zero Red soft C3 followed by a stint on the P Zero Yellow medium C2 and a final run again on the soft tyre after pitting under the safety car with 11 laps to go. Leclerc also set the fastest lap of the race on the soft tyre, shortly before the finish. His team mate Carlos Sainz followed the same strategy.

Under the 2022 regulations, all the drivers had an entirely free choice of tyres at the start. Everyone opted to start the race on the soft tyre, with the exception of the two McLarens, which fitted the medium for the first stint.

Mercedes and Lewis Hamilton made the first 18-inch tyre racing pit stop of the year, moving from the soft to the P Zero White hard tyre on lap 11.

The race got underway at 6pm with temperatures of 24 degrees centigrade ambient and 27 degrees on track - slightly warmer than the previous evenings - before dropping a couple of degrees by the finish.

Mario Isola: "The championship debut of the new Formula 1 regulations with our latest 18-inch tyres delivered a race with plenty of excitement from start to finish and some great battles. We are satisfied with how the tyres performed. The soft and medium compounds were key here, while the hard represented an alternative and more consistent choice.

"The lower temperature of the tyre blankets this year also contributed to the challenge of putting the tyres in the correct window, making the undercut for the hard less powerful than usual, while the abrasive nature of the track ensured that it was going to be at least two stops for every driver. The strategy was also influenced by the late safety car, which finally led to three stops and set up a dramatic sprint finish to the race. Congratulations to Ferrari for their one-two!"