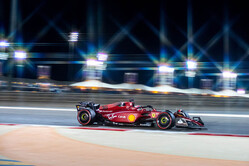 The sun is setting and floodlights illuminate the Bahrain International Circuit.

Well, here we are. Now we finally get to see who is giving it "full beans", and who is busy removing bags of sand from their cockpit.

The qualifying sims earlier gave us some insight, with Verstappen, Leclerc, Perez Russell, Sainz and Hamilton covered by just 0.577s.

However, while Mercedes appears to have had any bags of sand it might have had lying around, we have yet to discover if Verstappen, in particular, was giving it "full beans".

As if this battle between Red Bull, Ferrari and Mercedes wasn't enough, we have a genuine thriller in the shape of the midfield, with Haas and Alfa Romeo appearing to have made a gigantic leap forwards.

Meanwhile, McLaren is struggling, Alpine fluctuates as do AlphaTauri and Aston Martin.

Indeed, the only team that appears to be displaying 'regular' form is Williams, and it isn't good form.

Since FP3 the FIA has released the results of its three-month investigation into Abu Dhabi, and while the total lack of honesty leaves a bitter taste, it is the prospect of sessions like this, when the gloves finally come off and the teams and drivers do what they do best, that reminds us why we still love the sport.

Each phase of this session is going to be hard fought, and we are confident that along with some shocks there are going to be a few surprises.

The lights go green and Albon leads the way, followed by Latifi, Tsunoda - who didn't participate in FP3 due to a hydraulics issue - and Gasly. The Williams pair on mediums, the Alphas on softs.

As the four begin their first flyer, the McLaren pair head out.

As more drivers head out, all are on the softs.

Verstappen goes quickest in S1, maintaining the pace in the second sector. At the line it's 31.909.

Meanwhile, Perez goes quickest in S2, stopping the clock at 32.383 to go second.

A 32.346 sees Alonso go sixth, as the Mercedes pair begin their first flyers of the afternoon.

Russell goes eighth with a 32.546, only to be demoted when teammate Hamilton posts a 32.285 to claim fifth.

PBs in the first two sectors for Russell as he and his teammate remain on track for a second flyer. Russell improves to 5th with a 32.269.

On board shows Ricciardo really suffering from understeer.

Lots of PBs in the opening sector, as Albon goes 13th and Ricciardo 15th.

Hulkenberg improves but still fails to make the cut, while Albon makes it by the skin of his teeth.

"That's the first time since Brazil 2019 that we've had two cars through Q2," tweets Haas.

Albon heads out to get Q2 underway, the Williams sporting softs.

As the Thai driver begins his flyer, he is joined by Magnussen, Schumacher, Verstappen, Perez, Bottas and Zhou.

Albon actually pits without posting a time, indeed he is now the only driver not on track.

With 9:10 remaining, Magnussen posts the first time of the phase. The Dane posts a 31.461 but moment later Verstappen crosses the line at 30.757.

Gasly can only mange 12th, but is subsequently demoted when Norris posts a 32.473.

Ocon is eighth, ahead of Alonso and Bottas.

Magnussen is warned that he has a "big" hydraulics issue and has to return to the pits with no gear shifts.

Once again, Albon has the track to himself, this time around he posts a time, a 32.664, but it is only good enough for 13th.

Other than Albon, who has given up, and Magnussen, who has that hydraulics issue, Verstappen is the only driver who doesn't come out for the final assault.

Leclerc goes quickest in the final sector but remains second. However, a 30.787 sees the Monegasque leapfrogged by his teammate.

Hamilton takes fifth and Russell sixth, while a late charge sees Gasly go 9th at the expense of Ocon.

"Oh lovely," says Norris when informed he finished thirteenth. "Alright, best we could do today," he adds.