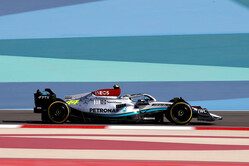 Pierre Gasly maintains AlphaTauri's testing form as he tops the timesheets, ahead of Ferrari pair and Russell, in unrepresentative session.

As is so often the case with these desert/evening races, with qualifying and the race taking place in totally different conditions this session and FP3 bear little relation to what we can expect tomorrow afternoon and Sunday.

Consequently, this will be a glorified test session which will allow the teams to test and updates introduced since last week and tweak those parts carried over.

In McLaren's case this means testing the overheating brake updates following their problems last week, while almost all the teams will be keen to see if they are any closer to solving their porpoising issues.

In case you weren't aware, having tested positive for COVID, Sebastian Vettel is replaced by Nico Hulkenberg this weekend.

Ahead of the green light Leclerc heads down the pitlane, the rear end of his Ferrari sporting a very large aero rake. He is followed by Bottas, Hulkenberg, Magnussen, Zhou and Hamilton.

Hamilton is wearing a mainly yellow and black helmet livery which he says is a nod to his karting days - and not a tribute to a former friend and teammate.

Purples in all three sectors see Ricciardo go top with a 36.918, only for Norris to stop the clock at 36.584. The McLaren pair are on softs while majority are on hards.

Out come the yellows as a large piece of bodywork is spotted on the pit straight, it is much of the right sidepod from Ocon's Alpine. The session is subsequently red flagged.

It is not clear what caused the damage to Ocon's car, which, it has to be said, is significant. Seemingly it is an updated sidepod not the one used in testing.

Just before that, Hulkenberg has a massive lock-up in the final corner, the German subsequently diving into the pits.

As we await the green light, only 13 drivers have posted times, the Mercedes pair - currently 6th (Hamilton) and seventh - were on mediums.

The session resumes with 40 minutes remaining.

Alonso, the only driver not to have appears so far, is among those heading out.

Gasly goes fourth (36.931), but is demoted when Verstappen crosses the line at 34.783 having gone quickest in all three sectors. Moments later Perez posts a 36.006to go third.

Still on the mediums, Hamilton improves to 13th with a personal best. For a brief moments the Mercedes is shadowed by Verstappen, until the Red Bull driver makes a move in Turn 14.

Russell reports that his car is being "very affected by the wind, compared to last week".

As the cameras show the Mercedes of Russell porpoising, a piece of the Briton's front wing falls from the car.

"A lot of understeer," reports Magnussen, "especially at lower speed and mid-speed."

On softs still, Norris splits the Ferrari pair with a 36.304.

Following a brief lull, there's a burst of activity which sees a number of drivers shift to the softs, including Russell.

As the Briton goes quickest in S2, Leclerc is quickest in Turn 1, only for the Monegasque to spin in Turn 11. Russell crosses the line at 34.629 to go top.

Sainz goes quickest in S1 but subsequently aborts the lap. No such issues for Tsunoda however as the Japanese driver - on softs - posts a 35.061 to go fourth.

Gasly goes quickest on the softs (34.193), ahead of Leclerc and Sainz as Verstappen sticks with the mediums. "what a lap, you're getting your mojo now," the Frenchman is told.

Still no time from Bottas whose issue is understood to be engine-related.

As Albon improves to 13th with a 36.050, Bottas finally heads out, sporting a set of softs.

PBs in all three sectors see Hamilton improve to seventh with a 34.943.

Stroll goes sixth (34.814) on the softs, while Bottas is back in the pits without posting a time.

While Bottas' woes continue, teammate Zhou goes 11th with a 35.053 on the softs.

Most laps so far is pace-setter Gasly (21), ahead of Sainz, Leclerc, Russell, Verstappen, Hulkenberg and Schumacher, all on 20.