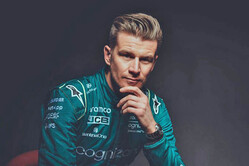 Sebastian Vettel has tested positive for COVID and will therefore miss this weekend's season opener. Replacing him will be countryman Nico Hulkenberg.

The news comes as Daniel Ricciardo returns to duty for McLaren, after the Australian missed last week's pre-season test in Bahrain after testing positive for COVID also.

Since the pandemic began in 2020, the Silverstone outfit, in its various guises, has been one of the teams most affected, with Hulkenberg replacing Sergio Perez at Silverstone for the British and 70th Anniversary Grands Prix and Lance Stroll at the Eifel Grand Prix.

Vettel is the ninth driver, others include Lewis Hamilton, Lando Norris and Charles Leclerc, to test positive for the virus, and today's news is sure to send a clear warning to the sport's bosses who have appeared to become far more relaxed this season.

Previously, the sport employed a strict bubble system in addition to mandatory PCR tests. This season, the tests are merely recommended.