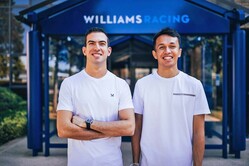 The 2022 FIA Formula One World Championship gets underway this weekend beneath the lights of the Bahrain International Circuit. Canadian driver Nicholas Latifi will be behind the wheel of the FW44, embarking on his third year competing for Williams Racing. He's joined by new teammate, Alex Albon, who returns to the sport for his third season of Formula One racing.

Sakhir's 5.412km circuit demonstrated its challenges in pre-season testing, offering a formidable combination of heat, wind and sand for the drivers to contend with, as well as a highly abrasive track surface. However, the assortment of long straights and slow corners offer good overtaking opportunities, which should make for an exciting season-opener in the desert.

Dave Robson, Head of Vehicle Performance: The opening race of any season is an exciting prospect and an opportunity to understand what our rivals were doing during pre-season testing. This season, with substantial changes to the cars, the tension and excitement is even greater, and we won't know the true order until Sunday night when we see which drivers are able to deliver reliable performance.

Winter testing has been tough, with only six days to investigate an almost entirely new package. Despite one day of low mileage last week, we still completed a lot of valuable running and have discovered quite a lot about the FW44. There is no doubt that there is a lot more to learn and we will see all the 2022 cars evolving quickly over the coming weeks. However, our job this weekend is to get everything possible out of the race on Sunday, to continue our setup work and to complete the integration of Alex into the Team by completing our first race weekend together.

Nicholas Latifi: It goes without saying that I'm super excited for the first race of the year. It's been a long pre-season with a lot of effort from everybody both trackside and in the factory at Grove to build us a car to go racing with, so I'm excited to see how we'll do come lights-out on Sunday. We'll be pushing for the best result possible.

Bahrain International Circuit is an interesting circuit, and the fact that it's a night race adds another unusual element to contend with. It's tough from a tyre management perspective as the temperatures are high and track is very rough; we also have the added challenge of understanding how the 18-inch Pirellis cope with those conditions. It should make for a really exciting season opener!

Alex Albon: I'm obviously very excited for the first race of the year and to be back racing. It will be the result of all the hard work over winter and everything we've learnt from six days of testing, so I'm looking forward to seeing that come together and pushing as much as we can. The track is tricky because, as we saw in testing, it's very windy, sandy and hot which are tough conditions to contend with. It's a good track for racing though, so it should be an exciting weekend for Formula One.