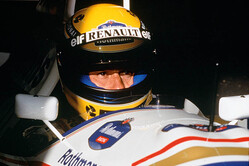 For the first time since 1995, the Williams cars will not be sporting the familiar Senna 'S' logo on its cars.

Those who could make out livery in the dark images issued by the team on Tuesday noticed that the Senna 'S', which Williams cars have sported since 1995, the year after the legendary Brazilian perished at Imola in one of the team's cars, was not present.

When the real car took to the track at Silverstone in the afternoon - in daylight - again it was clear that the logos were missing.

"The decision was that we want to move on in the future," Jost Capito subsequently told reporters. "We have a new era, we have a new car and we refurbished also our museum where we have a special area to celebrate Ayrton.

"We had to look now in the future and not showing the drivers the 'S' all the time they get in the car and being reminded on what happened," he added.

Admitting that Williams, which was bought by US investment giant Dorilton Capital in late 2020 and no longer has any involvement from the Williams family, had not consulted with the Senna family, Capito said the team aims to continue working with the Senna Foundation, the philanthropic organisation set up by the legendary driver's sister Viviane.

"More people benefit from this and if we can help people especially through the foundation, I think that's a very good programme but it has to be still finely defined," he said.