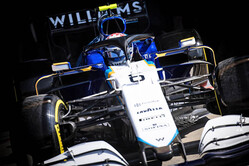 Williams has become the final team to announce the launch of its 2022 contender.

Thus far only one team has shared a glimpse of the look of 22, that being Haas courtesy of a few basic renders aimed more at showing off the revised livery as opposed to giving us a look at the actual car.

On Wednesday, Red Bull reveals its car, with Aston Martin following suit on Thursday and McLaren on Friday.

The FW44 will be revealed online on Tuesday 15 February, the day after AlphaTauri kicks off a week which culminates in Ferrari and Mercedes taking the wraps off.

Nicholas Latifi is retained for the coming season, the Canadian to be joined by Alex Albon who makes a welcome return to the grid after being dropped by Red Bull at the end of 2020.

The Grove outfit finished the 2021 season eighth in the standings, mainly courtesy of back-to-back success in Belgium and Holland.

Having qualified on the front row at Spa, George Russell benefited from the decision to scrap the race after just one lap, while, ahead of the summer break, the Briton and teammate Latifi finished 7th and 8th after Valtteri Bottas' first lap faux pas effectively ended Red Bull's challenge.