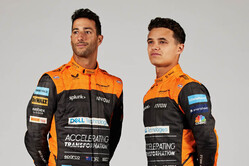 Lando Norris: "I can't wait to get jump back into the MCL36 and go racing. We're coming off a tricky test in Bahrain, but I'm feeling positive for the season ahead. The team has been working incredibly hard to address the issues we had at testing and make sure we're ready to battle it out on track this weekend.

"I'm really looking forward to the close racing and exciting battles that the new regulations will bring. I'm not sure what the order will be but it's going to be a close fight heading into the first qualifying session of the year and across the entire season. I can't wait for the challenge ahead.

"I'm excited and prepared to be entering my fourth season in Formula 1 with the team. I'm looking forward to building on the progress we've made together over the years and I'm ready to hit the ground running. The tests in Barcelona and Bahrain have taught us a lot about the car but there's still more for us to understand and work on. I want to thank every person in the team for their hard work and dedication in building the MCL36 so we can go racing this season. Hopefully we can have a strong start to the year."

Daniel Ricciardo: "I'm glad to be back, feeling better and ready for the Bahrain Grand Prix and season ahead. I was disappointed to not be in the car last week but despite being unwell, I've been able to keep in touch with the team, chat to Lando about the car and prepare as best as I can for the race weekend. I want to maximise the Free Practice sessions to better understand the car and fine tune everything ready for qualifying and lights out on Sunday. It's hard to know where we'll be on the grid but it's going to be competitive and I'm hungry to get back in the car and go racing.

"Heading into my second year with team, I feel more confident and comfortable than ever. I'm determined to build on last year's performance and use everything the team and I learned from the highs and lows to make this season one of our best. A new iteration of cars is something I'm no stranger to and comes with a lot of excitement. I'm looking forward to the battles out on track with these new cars, particularly at Bahrain with its overtaking opportunities. Let's get some great results for the team!"

Andreas Seidl, Team Principal: "After a busy winter, we're kicking off another exciting season of Formula 1 and the team is ready to go racing under the new regulations. Our aim is to continue to build on our progress from 2021, further closing the gap to the top and bringing the fight to our competitors.

"The entire team and our colleagues at Mercedes HPP have worked incredibly hard to build a car under new regulations and delivered a good platform to start the season. We continue to understand the car after a mixed pre-season test and the team are working hard to address the issue we encountered, in preparation for the first race.

"Daniel's season preparations were compromised by him being unable to drive during the test in Bahrain, however he got some good laps in at the Barcelona test. Daniel is fully recovered, and we look forward to having him back in the car this weekend.

"Thank you to every single member of the team for their dedication this winter to prepare us to go racing alongside Lando and Daniel. I also want to thank our incredible McLaren partners and fans for their continued support. The competition around us will be incredibly tight; it's hard to predict the pecking order at this stage but we are excited for very close racing, fierce on-track battles and a thrilling season ahead."