Herta to test for McLaren 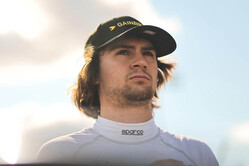 McLaren has confirmed that IndyCar driver Colton Herta will test for the team as part of its 2021 MCL35M programme this season.

Herta, son of IndyCar star Bryan Herta, became the youngest-ever winner in IndyCar history in 2019 when he took victory at the Circuit of the Americas.

Since then, the 21-year-old American has secured six wins and seven pole positions in the NTT IndyCar Series.

The opportunity for Herta comes with the new F1 sporting regulations, which enable teams to test one-year-old cars, under the Testing of Previous Cars (TPC) provision.

The McLaren F1 TPC programme provides an opportunity for the team to test potential drivers and evaluate young talent for the future. The Woking team will confirm further details of its TPC programme in due course.

"I want to thank McLaren for the opportunity to get my first laps in a Formula 1 car, which has always been on my racing bucket list," said Herta. "This will be a great opportunity for me to gain some valuable experience in a new form of motorsport and learn from such an established team like McLaren."

"Colton is a proven talent in IndyCar," added Andreas Seidl, "and we will be interested to see how he adapts to a Formula 1 car.

"We believe this testing programme will provide him with valuable experience while demonstrating the benefit of expanding previous car testing to showcase promising drivers for the future."

Interestingly, Herta races for Andretti Autosport, which is owned, of course, by Michael Andretti who is currently seeking to enter F1.

Furthermore, as F1's owner, Liberty Media, makes no secret of its desire to see an American driver on the grid. the TPC tests could lead to an FPq appearance later this season, especially as McLaren does not have any reserve drivers of its own. COTA anyone?