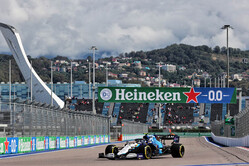 F1 has announced that it has terminated its contract and there will be no further Grands Prix in Russia for the foreseeable future.

"Formula 1 can confirm it has terminated its contract with the Russian Grand Prix promoter meaning Russia will not have a race in the future," said F1 in a statement this morning.

The move comes days after F1 announced that the 2022 race had been cancelled, though the promoter subsequently claimed that the event might yet happen.

2022 was to be the last race at Sochi before the Grand Prix moved to St Petersburg in 2023.

After years of false starts it was Russian premier, Vladimir Putin who was instrumental in bringing F1 to Russia, and with St Petersburg being his home town he was known to be looking forward to the city hosting the nation's round of the world championship.

A bonus can be found here however in the sense that F1 is likely to be able to find a number of promoters willing to step in to fill Russia's slot on the calendar, with Pitpass having already reported that a deal to host a race in Las Vegas is as good as done.

Today's move by F1 is the latest as sport effectively shuts Russia out following last week's invasion of Ukraine.

That said, the FIA has drawn widespread criticism for its decision to allow Russian drivers to continue participating in sanctioned events providing they race under a neutral flag.

Yesterday, Motorsport UK, which organises all 4-whell motorsport in the UK, announced that all Russian drivers and teams are banned from competing in events in the UK.