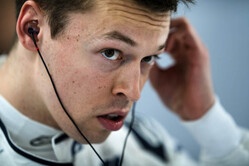 Former Red Bull and AlphaTauri driver, Daniil Kvyat has spoken out against the banning of Russian athletes from international competitions.

The driver's comments come as FIA president, Mohammed Ben Sulayem has called an extraordinary meeting of the World Motor Sport council to discuss "matters relating to the ongoing crisis in Ukraine".

Ignoring the fact that the FIA president has been widely criticised for referring to Russia's war on Ukraine as a "crisis", the Haas F1 team is currently considering the future of its involvement with Russian potash giant Uralkali which is owned by Dmitry Mazepin, father of driver Nikita.

"I really hope for a peaceful solution to this situation in Ukraine, and that we can all live in peace," Kvyat posted on his social media accounts today.

"Hopefully all parties can find a solution by sitting together and through a respected dialogue," he adds.

"It horrifies me to see two brotherhood nations in a conflict. I don't want military actions and wars to influence the future of humanity. I want my daughter and all children to enjoy this beautiful world.

"I would also like to highlight and address all sports federations across the world, including IOC, that sport should remain outside politics, and disallowing Russian athletes and teams from participating in world competitions is an unfair solution and goes against what sport teaches us in principle: the unity and peace.

"Who else if not us sports people will help to glue nations together in the upcoming times."

As Russia, now aided by Belarus, intensifies its assault on Ukraine, sanctions, including the exclusion of the country and its nationals from international sport, appears to be one of the most basic ways for the free world to make clear its condemnation at what is happening.

And while Oligarchs seek ways around the various sanctions, using their vast wealth to ease their passage, the ban on Russian sports gathers pace.

Though Haas insists that it can continue without Uralkali's funding, many believe the American outfit will be irreparably damaged without it.