Andretti has "formal agreement" with Renault 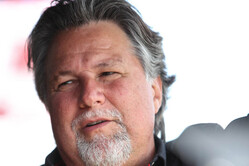 Mario Andretti has revealed that his son Michael, who is looking to enter F1 in 2024 with Andretti Global, has already reached a "formal agreement" with Renault for an engine supply.

It was two weeks ago that, 1979 world champion, Mario revealed that his son had officially lodged his interest in entering F1 with the FIA.

Speaking to David Land, who hosts a YouTube channel dedicated to motor sport, Andretti has given more insight into the potential new team.

"We have a formal agreement now on the engine supplier and it's out there, it's going to be Renault and I'm allowed to say it now," said the 1978 world champion.

"There was a lot of speculation from Toto Wolff, he was concerned about potentially it being Ferrari," added Andretti, referring to the extra political clout such a deal would give the Italian company, "meaning Ferrari would have more votes than he would have and so forth."

"There's a lot of steps to take here and I understand that," he said. "It's a huge undertaking, but we're ready for it. We have incredible partners on our side, Michael does, and we're there for the duration.

"Myself, I've been at it for 67 years now, so we know what goes on on all sides of the Atlantic and this is a great undertaking, a wonderful undertaking on Michael's part. This shows that he's very, very ambitious in the sport. That's his business, period.

"We know the prerequisites," he insisted, "also there's a time factor here... once we've said go ahead, we've got to go.

"A lot of work has been done. We know where the facility is going to be built in the UK. We know we have people, prominent individuals that have done this type of work as far as start-ups. We have a lot of things in mind."

Meanwhile, Michael, who failed in his bid to buy the Alfa Romeo/Sauber operation, revealed that he has previously attempted to buy the ailing Haas outfit.

"He doesn't want to sell," he tells AP. "If he wants to sell, tell him to call me. That makes it a lot easier for us.

"The last conversation I had with him was probably around October or November," he adds. "He told me he didn't care if he's running in the back, says it works for him anyway."

Of course, facing the loss of title sponsor Uralkali and its money, Gene Haas may well be considering a change of heart.