"Financially we are OK," insists Steiner 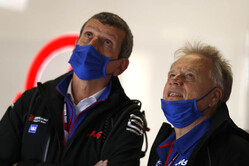 As Haas ponders a future without sponsor Uralkali, team boss Guenther Steiner insists that the potential loss of the Russian company's backing is not a threat to the future of the American outfit.

While thoughts are obviously with the people of Ukraine at this terrible time and sport is shown up for the irrelevance it really is, the hard fact is that life must go on, certainly as far as businesses are concerned.

Be it regarded by fans as sport or entertainment, F1 is very much a business, and while the sport's stakeholders consider the possible impact of sanctions - and indeed emotions - against Russia, the likes of Haas, which is heavily backed by potash giant Uralkali must consider its situation.

The American team has already removed Uralkali's branding from its cars along with any hint of 'Russian involvement', but it is the long-term effects that are set to give Gene Haas and Guenther Steiner sleepless nights.

Speaking to reporters at Barcelona today, as Nikita Mazepin suffered a technical issue, Steiner opened up on the possibility of ending the partnership with Uralkali.

"We have to sort out all the legal stuff, which I cannot speak about, next week," he said. "At the moment, as I said, we're not going to do it today.

"We made the decision yesterday with our team partners," he said of the removal of the branding. "This is what we're going to do. I need to work on the rest next week.

"There is no setback for the competition side because of this, none at all," he insisted. "We just need to go through the commercial issues. As I said before, we will do that in the next weeks."

Asked how much of a concern would it be if Haas had to part company with Uralkali, he replied: "Financially, we are OK. It has no impact on the team, how we are running it or how we are doing, how we plan this season.

"There are more ways to get the funding," he added. "There is no issue with that one."

Of course, the owner of Uralkali is Nikita Mazepin's father, Dmitry, who was pictured meeting with Russian premier, Vladimir Putin only last month. Asked how this might impact the driver's future with the team, Steiner appeared to suggest that outside factor would play a part.

"Not everything depends on us here, what is happening," he said. "There are governments involved and I have no power over them. We need to see also the situation, how it develops in Ukraine."

Asked how the driver is dealing with the situation, Steiner said: "He is putting a tough face on it. I mean, for sure it bothers him because it's his home country.

"There is no guarantees anywhere," he added. "As I said before, we just need to see how this all develops, where it goes. There is more than F1 team involved here there are governments involved in this one so I have no idea what is coming from that side."

Taking to social media, the Russian driver said: "It's a difficult time and I am not in control over a lot of what is being said and done. I'm choosing to focus on what I can control by working hard and doing my best for my Haas F1 team. My deepest thanks for your understanding and support."