Drive to Survive must "add value" to F1, says Domenicali 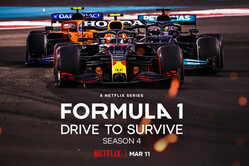 As F1 signs a new commercial boss, who has experience working with the likes of Coca-Cola, Stefano Domenicali sends out a clear warning to Netflix, saying that its highly popular docuseries Drive to Survive must continue to add value to the sport.

Other than the on-track battle between title rivals Lewis Hamilton and Max Verstappen, there is the drama and intrigue of their respective team bosses, Toto Wolff and Christian Horner going head to head.

And while there was plenty more to keep fans of the series glued to their screens, it is that intense rivalry, culminating in the events of Abu Dhabi that are sure to make it the most successful season yet.

While many, not least Verstappen - who refused to participate in the most recent series - have criticised Drive to Survive for creating controversy and bad feeling where there isn't any, Netflix has produced a winner with the series attracting many new fans to the sport.

"I think that it's important for us to be with Drive to Survive, with our Netflix friends, up to the moment where we believe that we'll make sure that it's a differentiating factor," he says.

"If it's becoming just a different way to speak about F1 without adding, or giving to the F1 platform any added value, maybe I think it's better to renegotiate and see with Netflix and with the other partners what could be a possibility to do something different in the future," he adds.

"But for sure, this platform has been a vital part on the growth of awareness, mainly with the young generation and with newcomers of F1," he admits. "And for that we need to thank that vision, and the process and the quality, that has been really very, very good."

The "adding value" comment can be taken in many ways, not least the suggestion that Netflix pays F1 more for its 'all access' rights, especially at a time the sport is already signing deals with race promoters through to 2036, such is the sport's desire (need) to bring in as much cash as possible.

Yet while Domenicali warns of renegotiating and "other partners", let's not forget that Netflix has now agreed deals for Drive to Survive style docuseries with the ATP and WTA tours as well as all four Grand Slam tournaments, not to mention a deal with the PGA tour and golf's major championships.

As more sports are given to 'DTS' treatment what hope of F1 retaining all those newfound fans, especially when they discover that the drama and controversy is not quite as frequent as portrayed and that many Sunday afternoons are the equivalent of watching paint dry... and not an attractive shade of paint but rather a dull, corporate grey.

The DTS move was the brainchild of Sean Bratches, who left F1 in 2020, one of several high-profile departures over the last couple of years.

According to Sports Business Journal, Snow, who will report directly to Domenicali, will be based in New York and London, was previously NBA Senior VP/Team Marketing & Business Operations, before joining American video game giant Activision, a company no stranger to controversy itself, in 2018.

As F1 gains increasing popularity in the US, mainly due to Drive to Survive, Snow has worked with many of the biggest American corporations, including Coca-Cola when he was working with Activision Blizzard Esports.

The sceptic, of which there are quite a few in F1, might well feel that having done its job and brought new fans on board, Netflix is being told to hand over more cash or else.

Meanwhile, before all those newfound fans get to realise that F1 isn't as constantly dramatic as they'd been told, and opt to check out the Golf and Tennis versions of 'DTS', the sport is looking to extract every available dollar while it still can.

And that, dear readers, is why one continues to question exactly who was pulling the strings that night last December.