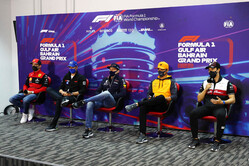 In response to George Russell's claim that Ferrari was looking strongest in pre-season testing, Carlos Sainz was clearly unimpressed.

"It's typical Mercedes, typical George," said the Spaniard, "hype up the others then come to the first race and blow the competition away.

"If it would be the first year they've done it then I would maybe believe them," he added, "but they've done it for five, six years now and they keep surprising us in the first race. So, as you can imagine, I don't believe much."

"It's always like this," added Verstappen. "If someone is doing well or a team that everyone expects to do well, then it's: 'Oh no, we're definitely not the favourite'. Then a week later, when things do go well, all of a sudden it's: 'Oh no, but we turned it around completely within a week. Not normal, unbelievable work. Thanks to all people in the factory...'"

"I think they will be dead last, according to their comments," the Dutchman laughed, when asked about the German team's testing form and Hamilton's claim that he won't be fighting for wins, far less the title. "I think they have an awful car, and they have that already since 2017 and pre-season testing...

"So now we'll find out," he added, getting serious. "I don't know, but they will be competitive for sure."

As for his own hopes this season, he said: "If you look at last season, during that season, we could have had more wins and more poles even. But you need a really competitive car to be able to do that, so it's going to be really difficult to do something like that again.

"Of course you always try and do better," he added, "so I hope if we have a very competitive car again that we can reach something similar."

Ahead of the report into the Abu Dhabi controversy, Verstappen is adamant that he has nothing to prove.

"I proved that with the most wins, the most pole positions, and most laps led," he said. "People forget that, they only look at Abu Dhabi apparently, but we have more races than only Abu Dhabi in a season."

Asked what he expects to come out of the report, the Dutchman said: "Every year it's good to discuss about happened in the year before. Right? You always analyse everything you do.

"So, yeah, we'll find out and if there's things that can be written down in an easier way, or a way to understand it better, the wording, then for sure. But let's see."