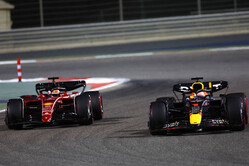 With the season opener ending in a double-DNF for Red Bull, it's understandable that Max Verstappen was left feeling the whole experience "painful", while Christian Horner described it as "brutal".

Though Ferrari, and in particular Charles Leclerc, always appeared to have the edge, for much of the Bahrain Grand Prix world champion Max Verstappen was able to keep within striking distance of the Ferrari.

A couple of over enthusiastic bids for the lead having failed, the Dutchman opted for the long game, but even so there were signs of frustration.

Following his second stop, having lost ground to the Monegasque Verstappen rued the fact that he had taken it too easy on his out laps. "I am never doing that again," he warned.

But it was after his third stop on lap 43 that things began to go wrong.

Once back on track the youngster complained that his steering was heavy. Despite assurances from his team that it was not a "reliability concern", the Dutchman was adamant that the steering was "heavy" "even on the straight", "everywhere, everywhere!".

"Mate, what's going on with the battery?"

"We can see the issue, Max. It's not battery related," he was told.

"What do you want me to do?" asked the Dutchman. "There's not a lot we can do," came the reply.

Moments after the world champion pulled into the pits, teammate Sergio Perez complained of a lack of power, the Mexican subsequently spinning at Turn 1 at the start of the final lap after his engine locked-up.

"What happened at the end is obviously very frustrating," said Verstappen, "but of course before that, quite a few issues.

"First of all the balance was off," he revealed. "I didn't have the same feeling as on Friday on the long runs, so that was a bit disappointing.

"Then suddenly my steering... I don't know what happened to that, it was just completely locked and the faster I was going I could barely steer. So it was not easy on the restart to defend from Carlos.

"But then I was still in second with that big issue so you think, ok, with all these issues that I've had today, second would be a good result... then suddenly I had to retire, everything just switched off. It looked like a fuel pump or issue, there was no fuel coming to the engine.

"Of course these things, you don't want them to happen and it's very painful for the team as well that both cars retired. We need to look into everything."

"I was very unfortunate," added Perez. "I lost the engine, locked the rears completely and there was nothing I could do. It looks a very similar problem to what Max had.

"I'm definitely disappointed," he admitted, "but we are a strong team and it's a long season ahead of us, we just have to remain working as hard as possible and next weekend is another opportunity."

"Obviously disappointed to lose the chance of a podium finish today," admitted team boss, Christian Horner. "It looks suspiciously like the failures are related to each other, it looks like potentially an issue within the fuel system.

"The positive side for us was we had a very competitive car," he added. "I don't think we had quite the pace of Charles today, but some great racing between Max and Charles.

"The steering issue was when the car got dropped on the final stop, we think it tweaked a track rod, so that's why it was slightly different left to right.

"It was a brutal finish to that race for us," the Briton admitted. "What looked like a decent haul of points for us evaporated in the last couple of laps there.

"When you look in from a season's perspective, we need to get on top of the issue, whatever it was today, and come back strong next weekend."