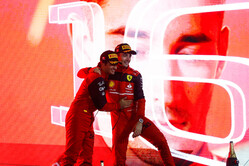 Cruising to the chequered flag for his third ever race win, Charles Leclerc scared the life out of his team by reporting an engine issue... thankfully he was only joking.

"I did a bit of a joke on the radio on the last lap saying there was something strange with the engine," the youngster told Sky Sports.

"The engineers, I'm pretty sure, didn't like that," he laughed, "but it was fun.

"I had that in mind for the last 10 or 15 laps of the race, hoping there were no reliability issues," he added. "Then I saw that Max had issues and I was like, ‘come on, please, stay with me until the end', and it did."

Even without the Monegasque's joke, team boss, Mattia Binotto admits to a 'heart attack' moment when the safety car was deployed following Pierre Gasly's retirement.

"There was certainly a heart attack for me on the pit wall when you're consolidating the positions and you've got the Safety Car ten laps to the end," said the Italian. "It was like... wow!

"We stayed out on our medium tyres because, making the simulation and calculations, Verstappen should have needed two seconds per lap to catch up at the end of the race, and two seconds is a big amount.

"Somehow, Charles was easy on the tyres and was managing the tyres," he continued. "He felt comfortable, so for us it was easiest to stay out and try to consolidate the position."

"I keep repeating myself," said Leclerc, "but the last two years have been incredibly difficult for the team. We knew this was going to be a big opportunity for the team and the guys have done such an incredible job in building this amazing car.

"So for now it's starting in the best way possible; pole position, victory, fastest lap, one-two today with Carlos. We couldn't hope for better."

Referring to the three bids that Verstappen made, each coming at Turn 1, the Monegasque said: "I was trying to be as clever as possible using the DRS as much as possible. "So I was trying to break early in Turn 1, just to be behind him at the DRS detection, and twice it worked out."

"Ferrari is back and it's properly back, with a one-two and where the team should have been the last two years," added teammate Carlos Sainz. "The hard work is paying off and we are there."