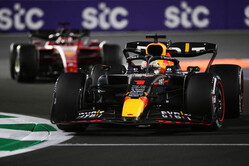 Though he lost out to Max Verstappen's "long game", Charles Leclerc admits that his cat and mouse battle with the Dutchman was "hard but fair".

As was the case in Bahrain just a week ago, Max Verstappen found himself pursuing Charles Leclerc in what very much appears to be a faster Ferrari.

As the race reached its final stages and the opportunities became less and less frequent it was clearly now or never for a world champion still eager to open his 2022 account.

However, when Fernando Alonso and Daniel Ricciardo both retired within moments of one another 15 laps from the end, the resultant VSC allowed Verstappen to rethink his strategy.

From the moment the VSC was withdrawn the pair began their cat and mouse battle which centred on the DRS point ahead of the final corner.

While Leclerc was initially able to hold off the Dutchman, even instantly reclaiming the lead once the Red Bull got by, just three laps from the flag Verstappen put the right move together, made it stick, took the lead and retained it.

"I don't think there was much more I could do," said Leclerc at race end. "There was one opportunity that we missed a little bit with the yellow flag in Turn 1, so we didn't have the DRS there and it could have been an opportunity to at least be alongside Max at the end of the straight. Apart from that, I think we did everything right as a team, strategy, pit stops, the dummy call on Checo at the beginning, so we are working very well as a team.

"The only thing that we missed this race is maybe a bit of a lower downforce level," he added. "But development will be key this year, and we need to push the maximum.

"It wasn't enough today," he admitted, "but my God, I really enjoyed that race. We are on a street track and we've been pushing like I've rarely pushed before, to the absolute limit.

"We took risks at the end, so there is respect, but I'm a bit disappointed. It's hard racing, but fair, every race it should be like this."

"It was a really tough but a good race," agreed Verstappen. “We were battling hard in the front and we just started to play the long game.

“They were really quick through the corners, we were quick on the straights," he continued. "The tyres were wearing out quite quickly around here. So you could see at the end I think we had a little bit more pace, so I just tried to get by. It wasn't easy, playing tricks in the last corner, but eventually managed to get ahead. But even after that he was constantly in the DRS.

“Then with the yellow flags on the last lap, just knowing how much you should lift, whether it's allowed or not, it was tough," he admitted. "But really happy that we kick-started the season."

"I was trying to do everything I could," admitted Leclerc. "I knew that my weakness was the speed in the straights compared to Red Bull, they were incredibly quick down the straights. The second to last straight I was just half throttle trying for Max to overtake me and for me to have the DRS. It worked once and then the second time, he understood so he braked very early and then there was a bit of a mess, but I think it was it was fun.