The show will go on, insists F1 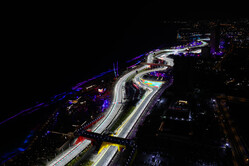 Following the meeting ahead of FP2, which saw the start of the session delayed by 15 minutes, FIA and F1 officials were summoned to the subsequent drivers' briefing for further discussion following the attack which took place just a few miles away.

During the course of the second meeting, to which the team bosses were subsequently invited, and which lasted for around four hours, a number of drivers raised concerns about the possibility off an attack but they were assured that everything was in hand.

Despite those assurances, once the F1 and FIA representatives left the meeting the drivers continued discussing the situation for a further three hours.

In a further twist, all post-practice driver press briefings were cancelled in order that no negative comments could be made.

"We have received total assurances that, for the country, safety is first, no matter the situation, safety has to be guaranteed," Stefano Domenicali told team bosses.

"They are here with their families, actually here at the track," he said of local officials, "so they have in place all the systems to protect this area, the city and the places we are going.

"So we feel confident and we have to trust the local authority in that respect. Therefore of course we will go ahead with the event."

Who are they (the Houthis) targeting, they are targeting the infrastructure, not the civilians, and, of course, not the track," insisted FIA president, Mohammed Ben Sulayem. "We've checked the facts and we've got assurances from the highest level that this is a secure place. Let's go on racing.

"All the families are here. We are only looking forward but with an assurance that nothing is going to happen."

When subsequently asked if all the drivers were in agreement with the decision, Domenicali replied: "They will be on track".

"I think the sport has to stand together collectively," said Christian Horner. "Any act of terrorism cannot be condoned. The sport shouldn't be bullied into a position that a situation like that just isn't acceptable.

"Stefano and the president, they're dealing with it," he added. "There's been all the assurances from the organisers and we'll be going racing."

"The circuit is probably the safest place that you can be in Saudi Arabia at the moment," added Toto Wolff.

Despite the assurances of Messrs Domenicali, Brawn and Ben Sulayem, it is clear that with the Grand Prix garnering so much global attention it should be considered a prime target for anyone wishing to draw attention to their cause.

The refusal to allow drivers to speak out is wrong, and a far cry from those heady days of 1982 when Niki Lauda led a drivers' strike at the South African Grand Prix over a change of rule relating to the superlicence.

Finally, has anyone else noticed that the official F1 website never reports anything even remotely negative about the sport?