"It was very painful for Lewis," admits Verstappen 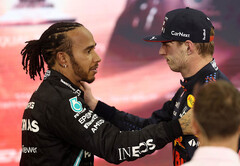 As Mercedes announces that it is withdrawing its appeal, Max Verstappen admits that he understands Lewis Hamilton's pain, disappointment and frustration over Abu Dhabi.

While the news that Mercedes has withdrawn its appeal against the Abu Dhabi stewards' decision to dismiss its protest might appear to draw a line under the sorry affair, the reality is that it is unlikely to do so.

Even the news that the FIA is setting up an investigation into the events of those fateful final laps will do little to appease the millions of fans worldwide who feel the sport had been tarnished.

While it is entirely possible that the findings will never be made public, much like the controversial decision in the wake of the investigation into Ferrari at the end of 2019, there is also the possibility that Michael Masi will be thrown under the bus, the Australian serving as the sport's sacrificial lamb.

Until this morning's statement from Mercedes there hadn't been a word from the German team since Sunday, nor its star driver, and ahead of tonight's prize-giving gala in Paris, Lewis Hamilton will probably be wishing that Emmanuel Macron had imposed his ban on British travellers to France 24 hours earlier.

Max Verstappen admits that he can feel his rival's pain, and respects him even more now than he did before in terms of the way he reacted in the moments after Sunday's race.

"It was very painful for Lewis and I would also be hurt in the way he lost it," says the Dutchman. "But in a way, still between us it's a bit different because I was fighting for my first title and he already had seven.

"He has been in the same position where he has won it in the last lap and it was very painful for Felipe at the time," he added, referring to that unforgettable day in Brazil in 2008.

"The little moment we had after the race already, you look each other in the eye... you don't say a lot but you do relate a lot throughout the whole season and you actually really appreciate the fight.

"Sometimes we did hate each other," he admits, "but that's fine, that's the competitive spirit both of us have.

"It's been a tough season," he admits, in a masterpiece of understatement. "We had definitely some dominant races, but also in general, I think Mercedes was a stronger team.

"But it's been a really enjoyable," he laughs, "having two teams fighting and pushing flat out to the end. Of course, at times you think, this might not be it, we might not hang on until the end. But there are always surprises.

"Some races I think we have won which we shouldn't, but then also I had quite a bit of bad luck, of course, with the tyre getting taken out and these kind of things. So we lost also saw a lot of points by that. But all in all, it's been intense but a crazy season.

"We were pushing each other, but we were pushing the whole team behind us as well to another level, which they maybe didn't think was possible. For everyone it was very intense.

"To be fighting every single race, everyone had to be so perfect with strategy, preparations before a weekend, no mechanical failures, and all these kind of things. There was a lot of pressure and stress for everyone involved."

One thing fans won't be aware of in terms of that epic final lap is that Verstappen was suffering cramp.

"I was behind Lewis going to Turn 3, Turn 4 and I had a massive cramp," he reveals. "So it's like full throttle, but barely, just having the force to push anymore.

"I was happy at Turn 5 so I could brake and relax for a few seconds, and then back on it for two long straights, which was very, very painful. But of course, for that last lap, you just bite through it."