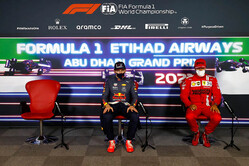 Max Verstappen, you are a Formula 1 World Champion?
Max Verstappen: It's unbelievable. I mean, throughout the whole race I kept fighting and then of course that opportunity on the last, it's incredible. I'm still having a cramp. But it's insane. It's insane. I don't know what to say. These guys here, my team, and of course Honda, they deserve it. I love them so much. I really, really enjoy working with them, already since 2016, but this year has been incredible.

Christian said with 10 laps to go that you might need a miracle to win this World Championship. You got your miracle.
MV: It happens. Yes, finally a bit of luck, for me. In saying that I also want to say a big thank you to Checo, I mean he was driving his heart out as well today. It was great teamwork and he is an amazing team-mate.

You have given us the most exciting championship this year, yourself and Lewis. This year will go down in history as one of the best ever and you came out on top. Have you got a message for your team, for all your fans who are here supporting you?
MV: To my team, I think they know I love them and I hope we can do this for 10 or 15 years together. There's no reason to change ever. I want to stay with them for the rest of my life. I hope they let me. Yeah, it's insane. I'm so happy. Christian but also Helmut who trusted me to be in the team in 2016. Our goal was of course to win this championship and we have done that.

Carlos, I'm not sure you expected a podium but I'm sure you will take it this weekend?
Carlos Sainz: I'll definitely take it yeah, especially after everything that unravelled in that race with that late safety car. We were in the right place at the right time all the time with a good pace and yeah, a podium to end a magic season, first season for me at Ferrari. P5 in the championship I think. I took it all today and definitely enjoyed it.

You had the pace today. The car looked good and the pace looked very strong.
CS: I was very strong today. From qualifying yesterday, that I did a good lap and today going into the race already on the laps to the grid the car felt really good and I could put together a strong first stint, a strong stint on the Hard. With the Safety Car at the end the nerves were high but we managed to keep it together and I enjoyed it a lot.

I have to ask you about Max and Lewis. Max coming out on top and becoming Formula 1 champion. What are your thoughts?
CS: I think whoever came on top today was going to deserve it. I think they are two great drivers at the peak of their careers, putting together a great show. Congratulations to both, especially for Max obviously after that mega win. Happy for him because we shared our first year together in Toro Rosso and to see him now be capable of winning a World Champion ship is also like a good thing for me and I look up to him.

Lewis, it's been an amazing season to watch for everyone, for the fans of Formula 1, whether you're a Max fan or a Lewis fan, it's been one of those seasons that's gone down to the wire, to the last lap of the race. It didn't go your way but you must be proud of what you have done this year?
Lewis Hamilton: Yeah, well firstly a big congratulations to Max and to his team. I think we did an amazing job this year. My team, everyone back at the factory, all the men and women we have, and here, have worked so hard this whole year. It has been the most difficult of seasons. I'm so proud of them, so grateful to be part of the journey with them. We gave it everything. This last part of the season we gave it absolutely everything and we never gave up and that's the most important thing.

You obviously started a little bit on the back foot at the start of the year, but as you said you guys worked together and had a very strong end to the season. It didn't quite go your way, but I think we've seen the best Lewis Hamilton I've ever seen and you seem very confident in your ability to come back next year and fight for that crown again?
LH: Of course, I've been feeling good, feeling great in the car these last couple of months particularly at the end. If I'm honest, we are still in the pandemic and I just really wish to stay safe and have a good Christmas with all their families and we will see about next year.

Max, many congratulations. We're going to come on to the world title in a moment, in a separate press conference. So, first of all, the race, how do you begin to sum-up those 58 laps?
MV: Hectic. In the beginning of course, we were clearly lacking pace, but I just tried to stay with him as long as I could in whatever fashion. We just didn't have the pace. Already the start wasn't good, somehow but then yeah, it was just really difficult out there. I was, of course, a bit on my own. Checo then did an amazing job to try and keep Lewis behind, so then the gap was again reduced, so then we started over again but clearly, he was again pulling away. Then we tried something different with the VSC, but it didn't really work out because clearly, we still didn't have the pace - but then of course it all turned pretty crazy at the end with that Safety Car and that restart in the last lap.

How were emotions in the cockpit at the end?
MV: Pretty crazy but also a massive cramp in my leg in that whole last lap. So I was behind Lewis going through Turn 2, 3 and I had a massive cramp, so I was like full-throttle but barely just having the force to push anymore, so I was happy that there was Turn 5 so I could brake and relax for a few seconds, and then back on it for the two long straights which is very, very painful - but of course for that last lap, you just bite through it but yeah, insane emotions afterwards.

A couple of moments I'd like to pick out. First of all, that battle with Lewis on the opening lap, going into Turn 6.
MV: Yeah, I had a good run and I went for the inside. I didn't even lock-up, I just made the corner, did my line and then, of course, he chose to use the escape route and basically gained an advantage by just staying in front by quite a bit. And nothing happened, so I just focused on myself and continued.

Carlos, coming to you now, your fourth podium of the season, what a fantastic way to end the year.
CS: Yeah, it's truly a great way to end a very positive first year in Ferrari for me. A very challenging year but in the end, it turned out to be a very strong one. A year that I'm quite proud of and yeah, to finish it with a podium that probably no-one will remember - I'll add it to the collection - because of whatever was happening in front. But yeah, I enjoyed it a lot and put together everything that I have learned through this first year to put probably my strongest race in Ferrari together.

It seems you've gotten stronger and stronger as the season's progressed. Even out-qualifying a Mercedes here in Abu Dhabi. How much satisfaction does that give you?
CS: It definitely gives me satisfaction to finish the year stronger than I started. I think I also managed to start the year on a very good level, which was the biggest challenge, learning a new car. Then I had a lot of things to improve on my driving. On the starts, on the race management and then I would say this last third of the season I've been the Carlos that I wanted to be, and the Carlos of the two very strong years in McLaren, and this has given me the opportunity to be very good in qualifying again, and good in the races and yeah, consistent.

You're fifth in the Drivers' Championship, ahead of your team-mate as well.
CS: Yeah. More symbolic than anything, because it's not like finishing fifth, sixth or seventh in the Championship today would have changed my mood going into the winter break. But, it's, yeah, another strong sign that this year was strong, that this year was positive for me, especially the way it finished in this last third, just gives me a lot of confidence going into 2022, for whatever happens and whatever car Ferrari and I have, we will go for it, because my confidence is high.

And 2022, 98 days away.
CS: Yeah, not that many. A well-deserved break coming up because I've spent a lot of time this year in the factory. I've spent a lot of time in meetings, doing extra hours at the track, extra hours everywhere and I feel like I deserve a bit of a break. Still some important testing to do next week, to learn about the tyres and prepare 2022 - but then I think I deserve some time off.