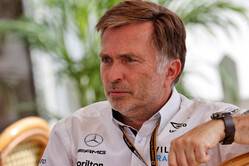 Williams CEO, Jost Capito, who was previously boss at Volkswagen motorsport, says he believes the manufacturer is serious about entering F1.

While the German giant is not understood to be considering the sport as a constructor it is looking at entering as a manufacturer, attracted by the new engine rules set to be introduced in 2026 which will see simplified, cheaper, sustainable power units.

For as long as anyone can remember VW has been linked with F1 which would enter the sport using either the Porsche or Audi name.

Earlier this month, Thomas Laudenbach, Porsche's vice-president of motorsport, confirmed that the conditions under which the company would enter the sport were now "coming true", but that it cannot "wait too long" on a decision.

Asked what the chances are of Volkswagen making the move, Capito insists the German giant is serious.

"If they have been serious, they have been part of the engine regulation discussions, I don't think they waste their time in going to these meetings, especially also the CEO coming to those meetings, and not being serious," he added.

"But finally, it depends on what the final regulations are if then the Volkswagen Group thinks it makes sense, they might go to the board and ask for a decision."

Earlier this month, it was claimed that the McLaren Group had been sold to Audi, a move quickly denied by the Woking company.

Capito is doubtful that Volkswagen would consider F1 as a constructor but also admits that partnering with an established team might present difficulties.

"It's always difficult with a known team," he said. "Especially with a German team, with all the union regulations you really can't run a race team.

"This is why Audi in the past went with Joest and others," he continued, referring to its WEC programme, "it's the same as BMW, because it's very difficult to run a factory team. It might be easier if it is abroad. I really don't know.

"When you look at the Volkswagen Group they had different strategies in the past. The rally team was a full factory team, and Porsche did full factory teams outsourced, the same as with Audi.

"I'm not involved in that kind of discussions," he admitted. "But I think that explains enough to take the right decision for them."