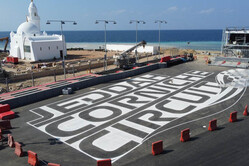 Set to host the penultimate round of the season, work on Jeddah's Corniche circuit track is set to be finalised in record time.

Work on the track - which is officially termed a temporary facility - only began last April and is set to be completed in the coming days.

No F1 circuit has been constructed in a shorter period, a testament to the hard work and dedication of the inaugural Saudi Grand Prix’s devoted workforce, who have been striving tirelessly to deliver the facility on time.

Wok on the circuit was accomplished under the strictest health and safety conditions, with millions of man-hours of work taking place on site with no serious incidents.

All work was carried out according to detailed and robust Saudi Arabian Labour Laws, guaranteeing the protection of the rights of workers on-site including the limiting of working hours in direct sunlight.

Overall, the promoter collaborated with 3,000 on-site contractors from approximately 50 separate companies. While many of these partners are Saudi Arabian, the event organizers also utilized the vital support of suppliers from countries such as Germany, Austria, the UK, Spain and Italy. In addition, and at all times, the rigorous standards and scrutiny of both Formula 1 and their monitoring consultants were applied.

With the countdown now on until the Jeddah Corniche Circuit opens its doors in less than two weeks, here are some key key facts and figures that further tell the story of the newest ciruit in F1:

• The Jeddah Corniche Circuit has a track length of 6,175 km making it the second longest circuit on the calendar after Spa-Francorchamps in Belgium and the longest street track in F1

• Average speeds are expected to reach 252km/h - the fastest street circuit on the calendar with highest speeds estimated to peak at 322km/h between Turns 25-27!

• When construction is complete, about 2,000 trees will be planted around the circuit

• 7 permanent landmarks & statues are positioned inside the Jeddah Corniche Circuit

• Lighting levels are set at 1,500 lux, with more than 200,000 metres of cabling, including power and fibre, already laid to ensure everything is lit to perfection

• As part of the circuit’s lagoon regeneration project, a staggering 162.814 tons of sludge and debris were dredged from the lagoon and divided into separate stocks, with the former treated and recycled while the latter was safely and responsibly disposed of

• As a result, the surrounding area has already seen a welcome return of wildlife, while the lagoon is already teeming with fish including mullet, milk fish and blue spotted stingray

• The circuit designers are extending the popular Corniche walkway along the circuit and populating it with a series of outdoor recreational opportunities for children and adults including new walkways and cycling paths, children’s playgrounds as well as the establishment of family friendly restaurants, public restrooms, increased parking spaces and much more.