Hamilton to have 'rocket' engine for Jeddah 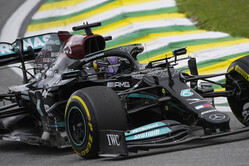 At next weekend's Saudi GP, Lewis Hamilton will have the 'rocket' engine he used to such devastating effect in Brazil.

At the start of the Interlagos weekend, following days of speculation, it was confirmed that the world champion would take a 5-place grid penalty after taking on a new ICE.

While, the Sao Paulo circuit is one that encourages overtaking, there were fears that the move could backfire as the high altitude and track characteristics actually favoured the Red Bull-Honda package.

However, despite the various penalties incurred over the course of the weekend, the Briton delivered two masterclasses going on to win the Grand Prix and close the gap to his title rival.

Questioning the sheer speed of Hamilton's car, Christian Horner, described the power unit as a "rocket", while Sergio Perez said it was from a different planet.

The bad news for Red Bull and Max Verstappen is that the power unit will be in the back of Hamilton's W12 for next weekend's Saudi Arabian Grand Prix.

"We've seen pretty big swings of performance over the recent races," Mercedes trackside engineer, Andrew Shovlin told Sky Sports, "but if we look at the track in Saudi, I think it should suit us.

"For Lewis, we have got the more powerful engine to go in the car, so that's going to give him a useful engine," he added.

Horner claimed that at the end of the main straight in Mexico, Hamilton's speed was 14 km/h quicker. However, a week later, with the new unit, the Red Bull boss claimed that the Mercedes was 27 km/h quicker than Lando Norris when he passed the McLaren.

"It's something that we're going to keep an eye on," said Horner, "because, particularly with Lewis today, that was just a different league."

In Qatar the speed differential wasn't so great, with Mercedes suggesting that Red Bull had found some pace, a claim the Austrian denied.

However, Shovlin reveals that due to the nature of the Losail track Mercedes saw no benefit in running the new engine.

"There are two that we are racing," he said. "Here we had the less powerful of the two in the car, due to the nature of the circuit. So that side of it is in a good place at the moment.

"We're always cautious to go to a race thinking that it's all going to go our way," Shovlin admitted. "What we do know though are the things we've got to get right on the set-up, what we need to get right on the tyres and how they're working, and that's what we're going to be busy doing over the next few days, making sure we're taking every possible opportunity to arrive there in good shape.

"With a new circuit, arriving in good shape is such a big thing from the learning curve, if you've got a good car to start with, you can just improve it from there."

"In Saudi it should be a good track for us," Toto Wolff subsequently told Sky Sports, "but we know this year, when we think it is a good one, it can turn the other way around.

"But it is long straights and we will get our spicy equipment out, the engine, for Saudi Arabia," he smiled.