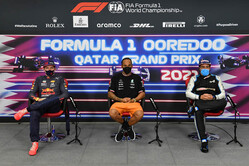 Lewis, after a faultless qualifying effort yesterday, a great race. It looked really straightforward from the outside, but I'm sure it wasn't.
Lewis Hamilton: Yeah, well, I always like to give a thanks to all the people that came out today, because it's the first time we've seen a crowd here in Qatar, so thank you all for coming. Yeah, it was pretty straightforward. It was pretty lonely at the front. Of course I enjoy those races where you are battling through, but we needed those points today, so a real solid job from the team, just with pit stops, with the car and yeah, I can't wait to watch the replay of the race to see what happened behind me. I'm not really sure why people's tyres were going, I'm sure it was the kerbs. But yeah, I'm really, really grateful for these points. It's been a hell of a year, so to be at this point of the year and to get back-to-back wins is a great, great feeling and it puts us in good stead for the next two.

I think we all agree that this year is probably going to go down in history as one of the greatest, if not the greatest, title fight, between Max and yourself. You've got it down to eight points with two races to go, what's the feeling going into those two races?
LH: The feeling feels good. I'm really, really happy with the car. I feel fit. Fitter than I've ever felt, so that's a positive. A big, big thanks to Ange, who is helping me to train, keeping me on my toes. Recovery has been great, so yeah, bring on the next two.

Max, obviously you always come away with a victory and your main championship rival won the race today, but damage limitation. You also got the fastest lap of the race. It wasn't too bad a race was it?
Max Verstappen: Yeah, our starting position was a bit compromised but luckily we had a really good start and from there onwards I was quite quickly back into second, so at the end of the day to get that fastest lap was very nice. Of course I know it's going to be difficult to the end but I think that's nice, it keeps it exciting.

It's been quite a controversial weekend for Mercedes and Red Bull, but I'm sure it was nice to get out on track and actually have a proper race out there?
MV: Yeah, it was good. This track is a lot of fun to drive as well. It's really, really quick. Also degradation-wise the tyres were holding on quite well. Yeah, it was cool.

Only two races to go, championship fight, eight points between you, how are you feeling going into the last two?
MV: I feel good, like, it's going to be a tight battle to the end.

Congratulations Fernando. I think there's a lot of excitement here from your team Alpine and I think everyone around the world is excited to see you back on the podium. It's the first time since 2014, Budapest.
Fernando Alonso: Yeah, unbelievable. Seven years, but finally we got it. We were close a couple of races but not enough. Sochi was the last possibility and yeah, today, honestly I thought to be leading after lap one. I thought with the red tyre I thought I could have a go and risk. But yeah, I couldn't and then with Checo it was very close at the end. But so happy for the team. Also, Esteban P5. A good Sunday.

For us watching it looked like you were really looking after your tyres during the race and then pushing on the last four or five or six laps on the tyres. It was a real thinkers race today.
FA: Yeah, we planned one stop from the beginning but we never knew how bad was the wear and the degradation. It's a new race for everybody. But I think it was quite well executed, the race. The pit stop was fantastic. The team was great. The reliability of the car was superb and they deserve it.

Enjoying Formula 1.
FA: I am enjoying and (laughs) F**k, I was waiting so long for this! I am happy.

Tremendous race Lewis, well done. You looked to have it under control from the outset. Is that how it was in the cockpit?
LH: Thank you, thank you. Well, it was just an amazing... these past three weeks have been so difficult for everyone with such big distances between all the races and the team did such an amazing job - particularly these past two races, and today, of course, the race was made a lot easier with the penalties that the guys obviously got for the mistake they made yesterday. That made it a lot more straightforward and yeah, I was just managing the gap at the front and just keeping the car safe and trying to maximise and bring the car home.

Talk us through the start. Was your life made difficult with you being on the Medium tyre and the cars around you being on the Soft?
LH: Yes, a little bit. There was a little bit to gain from being on the Soft tyre but I generally felt I wasn't massively under threat. I managed to cover the ground just off the start and after that it was just head down and focused on trying to bridge the gap. I already saw that when I got to Turn 6, Max was already in fourth place, so I knew he was already past my team-mate, and at the time I obviously didn't know that Valtteri had had such a bad getaway but after that I was just focused on trying to maximise the points for the team. So, I was feeling strong. I think they had relatively decent pace, but I was able to manage the pace, so it was no problem.

And Lewis, any nervous moments for you when your team-mate had the puncture?
LH: No. I mean, I wasn't... I was managing quite well, I wasn't on any of the kerbs, so it wasn't a concern for me. I assumed they were coming from people running on the kerbs but I was never near any of them, that wasn't the issue. I'm really, really grateful, as I said, to my team. Big thank you to all the guys, the men and women back at the factories who have been pushing so much over this... particularly this second half of the season, to really try to bridge the gap, to really try and bridge the gap to our competitors. It's a great feeling but there's no time to celebrate, there's no time to rest. We keep our head down and we keep chasing.

You talk about bridging the gap to Max. It's now down to eight points, having been nineteen after the Mexican Grand Prix just two races ago. How confident are you feeling?
LH: As I said, I feel great. I feel in the best shape physically that I've been in all year. So just feel... obviously at the beginning, not particularly that well, so yeah, I feel great, the car is feeling better than ever, and I feel positive going into these next couple of races. I think they should be quite good for our car, so I'm looking forward to that battle.

Max, coming to you, great race by you as well. Given where you started back in P7, how important was this P2?
MV: It was of course very important to try to clear them as quickly as possible. I had a really good getaway and I was already fourth out of Turn 1. Then I think within five laps I was second and yeah, just tried to keep the gap close with Lewis as much as I could, and I think that worked out well. We just didn't have the pace this weekend to match them. I just tried to follow and yeah, it was alright at the end. I did the fastest lap, which I was pretty happy about. At the end of the day it's one extra point. Everything counts at the moment but yeah, overall I would say this weekend wasn't the best for us, but there's still two races to go and a lot of things can happen still, so we'll see.

You said you didn't have the pace of Mercedes today, but when you'd made it into second place, as you say, after five laps, did you at that time think you could challenge for the win?
MV: You obviously have to wait and see a little bit. Quite early on in the race, I saw that was not really on, so I just tried to do the best I could by managing that gap.

And talking of gaps, can we just get your thoughts on the World Championship fight now. Eight points, two to go.
MV: Yeah, it's exciting. I would of course have liked to make it a bigger gap, but when you don't have the pace, it's impossible to do that, so we'll just try to be better, and come back strong, especially in Saudi on the street track, and then yeah, we'll see in Abu Dhabi.