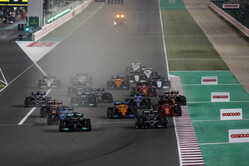 To be clear, when we suggested yesterday that the results of the stewards investigation into whether Max Verstappen breached double-wave yellow flags at the end of Q3 would be announced during the national anthem we were only half joking.

Indeed, such is the way the sport is developing, a cross between a soap opera and WWF, nothing would surprise us anymore.

The fact that the final grid positions of the three drivers - one of them in contention for the title - isn't known less than two hours before the start is either down to incompetency or for dramatic purposes.

Of course, the sport's powers that be are torn, for on the one hand there is the scenario whereby Max is demoted five or ten places and therefore has to 'do a Lewis', while on the other hand there is the prospect of a first corner clash involving the Dutchmen and his nemesis.

One has to wonder, what would Turk do?

Assuming Max is banished to the nether reasons of the Qatar grid, the first corner, indeed the first lap, should still provide plenty of drama, especially as a number of drivers have made it clear that following the failure to take action over last week's incident on Lap 48, they will adapt their driving styles accordingly.

Based on the evidence thus far, this race is Hamilton's to lose, the Mercedes having been strong all weekend. His pole-winning lap was the seven-time champion at his best, the best possible way to hit back following the frustration of Interlagos. Also in the Briton's favour is that this is a circuit where overtaking is difficult, unlike last week at Interlagos where Draftkings like Hamilton excelled.

Valtteri Bottas is up there and ready to lend his full support, or at least he was, the stewards handing him a 3-place grid drop for a yellow flag infringement.

The fact that the Finn was the last of the three drivers summoned by the stewards but the first to have his penalty announced should in no way be seen as milking the drama.

Indeed, 95 minutes before the start the stewards announce that Verstappen drops 5-places.

On a circuit where overtaking is difficult, this is a massive blow to Verstappen and Red Bull whilst a significant boost for Hamilton, Mercedes, TV viewing figures and social media activity. Ker-ching!

Consequently, the expected midfield mayhem takes on a new dimension, what with the addition of Verstappen to the pack.

Meanwhile, Pierre Gasly joins Hamilton on the front row, with Fernando Alonso and Lando Norris just behind. Bottas starts from sixth, behind Sainz and just ahead of Verstappen, who has Tsunoda, Ocon and Vettel in close attendance.

Already frustrated by the Mercedes pace, the grid penalty is likely to cause red mist in Verstappen's helmet, so there is every chance of fireworks. However, other than that there is the ongoing battle between McLaren and Ferrari, not to mention Alpine and AlphaTauri who must both fancy their chances of a decent points haul with their lead drivers at the front of the grid.

Other than overenthusiasm at the start and over the course of the race that follows, the drivers will have to pay attention to the track limits.

While the rules have appeared to change with every session, the fact is that aside from having times deleted, running wide has caused damage to a number of cars, with Nikita Mazepin and Charles Leclerc requiring new chassis, not forgetting the wing damage to Gasly's car that brought about the Q3 yellow flags issue in the first place.

Then again there is the question of tyres and how they'll stand up to one of the toughest tests on the calendar.

Close to that is another two-stopper, but this time with one stint on softs followed by two stints on the mediums.

All three compounds could also be used in alternative two-stopper (maybe starting on the medium and running the hard in the middle before moving to the soft for the final part of the race) but this is likely to be slower. As always, all these stints could be run in any order.

With Losail being a brand new venue, there hasn't been an ample bank of data gained in free practice - with two of the sessions not held in representative conditions anyway.

As a result, the teams certainly haven't yet seen the full picture, and there could still be some surprises, particularly if track temperatures are lower. A one-stopper is still not advised though because tyre wear appears to be quite high.

The Mercedes pair, Verstappen and Sainz were the only drivers who got through Q2 on the mediums.

This has been a thrilling season thus far, and with three races to go it's anybody's idea how it will develop.

We can put up with the politics, heck F1 has always had its politics, however it's the manipulation we don't want, and there is an increasing feeling that rather than let the 'players' develop the plot themselves, the stakeholders, with the aid of the media - where have we heard that one before - are seeking to push things along for the benefit of the show.

All we hope for today, and in the races that follow, is for good racing and results decided on track not in the stewards room or law courts.

On the grid there is confusion as Ferrari and Mercedes both appear to think they start from the first slot after the FIA made a mistake with the provisional grid positions document it released.

The sun is beginning to set, with the temperatures falling accordingly.

Other than the Mercedes pair, Verstappen, and Sainz, Perez, Stroll, Leclerc, Ricciardo and Mazepin start on mediums, the rest are on softs.

With Gasly and Alonso on softs, Hamilton will have his work cut out at the start and on the long run to Turn 1.

A number of drivers hold back, among them Sainz, keen to get off the dirty side of the track as soon as possible.

They're away. Great starts from Hamilton, Alonso, Gasly and Verstappen. Into Turn 1, Hamilton leads Gasly and Alonso while Verstappen, Norris and Sainz are three abreast with the Dutchman on the inside.

Norris begins to pull ahead but Verstappen had the advantage and despite running a little wide is alongside the McLaren in Turn 2 but ahead by Turn 3.

Meanwhile, also in Turn 3, Alonso is on the inside of Gasly and takes second from the Frenchman.

However, in the midst of all that Bottas has a dreadful getaway and has lost a number of positions by the first corner, as has Vettel who ran wide.

At the end of Lap 1, it's Hamilton, Alonso, Gasly, Verstappen, Norris, Ocon, Sainz, Tsunoda, Perez and Stroll. Bottas is down to eleventh.

In Turn 1 at the start of Lap 2, Perez nails Stroll for 9th.

Verstappen is all over Gasly who is hard on the heels of Alonso. Hamilton already has a 2.6s lead over the Alpine.

On Lap 2, Hamilton posts a new fastest lap (30.198), while Verstappen complains he doesn't have pace - no doubt a reference to the mobile chicane(s) ahead of him.