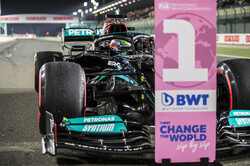 The images were circulated to the media by the Red Bull team as part of the ongoing war or words between the Austrian outfit and its German rival.

Team boss, Christian Horner insists that the images reveal the score marks mentioned during Friday's infamous press conference and which, according to his team, demonstrate that the main element of the wing is flexing under aerodynamic load.

Faced with the 'evidence', Toto Wolff was nonplussed.

"I can't see anything on this photo other than stuff being scratched, a ghost," said the Mercedes team boss. "I don't know where they got this photo from and what it shows. It's a ghost."

In light of the row, this weekend has seen stricter load tests introduced, which were made public by TV crews on Saturday as the rear wing on Max Verstappen's car was inspected.

However, Wolff says the test was due to be introduced in 2022 and even so it holds no fears for him.

"I think they are trying a new load test, also for next year, to have these things more robust and checking how much a wing deflects," he said. "I think it is not in the regulations or a TD but more of an experiment.

"But it will be interesting to see the results, because I think we are on the good side," he added. "But I am pre-empting because I don't know what the results are or when they want to do it. We need to find out with the garage."

Asked if he expects a protest from Red Bull in the coming races, he replied: "I don't know what they are planning to do, but as I said, I can't keep up, I can't follow their thinking.

"It seems erratic," he added. "But that's OK because I don't want to put any more oil in the flames.

"We are trying to look at ourselves and do the best possible job. We are still on the back foot with 14 points and we need to do a good race. That's what counts."