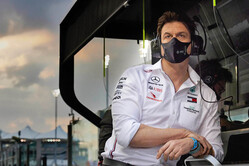 Speaking in the press conference, Christian Horner warned that if 'score marks' seen on the rear wing of Lewis Hamilton's Mercedes in Brazil were seen again, he would have no hesitation in protesting the car.

"When you have a 27 km/h (speed) difference, and you see marks on rear end plates that have been marking up from wings that have been flexing, it's very clear to us what has been going on," said the Briton.

"If you're led by scepticism, because someone told you something, and you expect that to be the root cause, you should go for it," responded Toto Wolff. "I think we've been controlled fourteen times on this very particular wing, the FIA has all drawings about it.

"There is no such thing as Red Bull expects there to be," he added. "So we are happy to send it, cut it, we can send you one to Milton Keynes."

"So how do you explain the score marks on the rear wing endplate?" asked Horner.

"I think it's within what is allowed," replied Wolff. "And, therefore, that's okay.

"I think that nobody would show up at the track with an illegal engine or an illegal rear wing," he added. "The world is too transparent for that. And you would be mad if you take decisions in a team with such a high visibility that are illegal, 100%."

"We've had a look at it, and there are no score marks," he said. "So we're not quite sure what that is. But it seems to be a bit of a story that's not going away.

"We go to every circuit, we look at what the fastest wing we have is, and that's the one that we'll bolt to the car. And that's what we'll keep doing."

Asked if the ongoing drama was distracting the team, he replied: "There are a few sort of mortar shells going across in both directions, probably. But you know, the team has really come together.

"What was encouraging to see was, with a weekend like we just had in Brazil, with so much distraction in so many different areas, whether it was with the team or with Lewis, it was just heads down and get on with the job.

"We've shown the car has the pace to do that. I think Brazil was fantastic for our confidence that we can bring both these championships home. But it's an amazing place at the moment. It's just everyone's working so hard to deliver that."