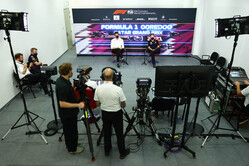 Insisting that Mercedes recent straight-line speed is "not normal", Red Bull boss, Christian Horner admits that he will not hesitate in protesting the car.

Media and fans alike were left disappointed on Thursday when the FIA announced that a decision on Mercedes request for a right of review would be delayed until Friday.

Come the day we waited for news... but nothing.

And then, bang in the middle of one of the most intense (F1) press conferences since Canada 2003, Toto Wolff and Christian Horner were advised that the request had been denied.

This was TV drama at its finest, indeed all that was missing was for the announcement of the FIA's decision to have been made by a celebrity… their bodyguard... or Oprah.

Rapidly, F1 is becoming a cross between a soap opera and WWF - and we don't mean the wildlife charity.

Among the various barbs tossed around over the course of the 'show', Christian Horner repeated his claim that something is not quite right about the Mercedes, in particular its recent increase in pace, described by the Briton in Brazil as "mind-boggling".

Asked if he would consider protesting the car, Horner was in no doubt.

"Would I protest?" he replied, almost incredulous. "Yeah, absolutely.

"If we believe the car is not in compliance, we will protest," he continued.

"The straight-line speeds that we've seen in Mexico and in Brazil... I mean, I think everybody could see Brazil was not a normal situation," he said. "And yes, a new engine we know with Mercedes comes with increased performance.

"It's very clear to us what has been going on," he added. "So, of course, that's why I refer it's down to the FIA to make sure that the cars are in compliance. If they're not, you protest if you believe that a competitor isn't complying with the rules.

"We'll follow the situation," he warned, "and it will depend really on what happens this weekend, what we see, and the analysis that we've conducted.

"So it really depends on what we see, and it's not just applied to here because I think it's in many respects even more pertinent to the two circuits that are coming up.

"But as a competitor, as I'm sure Mercedes, and we know, have paid a huge amount of attention to our car throughout the season and we're obviously doing the same.

"Obviously it's high stakes, there's an awful lot to play for and we just want to make sure it's an equal playing field. What we absolutely want going into these last few races is a fair fight.

"We just want to ensure that going into these last few races, that these cars are being scrupulously policed and are in full compliance, because there's too much at stake."