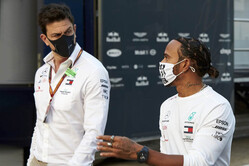 While the rest of us might be bored by the ongoing war of words between Toto Wolff and Christian Horner, Lewis Hamilton admits to loving his boss's fighting spirit.

Last weekend was a case in point, particularly for Toto Wolff, who, in his own words admitted that the Sao Paulo weekend was a "triumph through adversity".

First there was accepting the fact that due to the surprising degradation of the Mercedes power unit, the team had to bite the bullet and give Hamilton a new ICE, thereby incurring a 5-place grid penalty... at a track that favoured Red Bull.

Then came the investigation into the British driver's rear wing and his subsequent disqualification from the qualifying results and therefore having to start the Sprint from the back.

All this, combined with the controversial incident on Lap 48 would have been enough to drive some men to drink or tears, therefore it was understandable, that when Hamilton finally passed his nemesis for the lead, Wolff looked straight into the cameras to vent a mixture of joy and frustration, leaving those watching in no doubt.

In the aftermath of the race the war of words continued, with Wolff effectively warning that the days of diplomacy were over.

"I love seeing Toto's fighting spirit," laughed Hamilton when asked about Wolff's attitude as the Qatar weekend got underway.

"It makes me so happy," he continued. "There's a shot I saw from the last race and it just made me laugh inside, it was so good.

"If he just cared less and was just chilled, it just wouldn't be..." he paused, "that fire and passion is a part of our infrastructure and our ecosystem and it trickles down from him.

"He is the leader of the team," he added. "You want that in your boss, someone that's out there go-getting and pushing and chasing every millisecond and with you along the way.

"I love that he stands for what he thinks is right. We've grown hugely closer over these years."

The shot of Wolff jabbing his finger at the camera and mouthing the word yes has since become an internet meme, though the Austrian insists that the gesture was "just a friendly hello at the race director".

Check out our Friday gallery from Qatar, here.