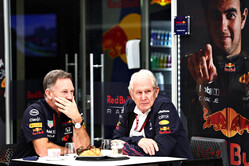 Helmut Marko admits that if Mercedes can maintain its Interlagos pace over the coming races, Red Bull can write-off its title hopes.

Watching Lewis Hamilton scythe through the field on consecutive days last weekend, one would be forgiven for believing that it is Mercedes that has 10 wins to its credit this year as opposed to rivals Red Bull.

Once the Briton got past his title rival he left him for dust, Verstappen finishing almost 11s down on the leading Mercedes and rapidly falling into the clutches of the second.

Armed with a fresh ICE, Hamilton was setting the pace from the outset, however it was the W12's sheer speed advantage that had Christian Horner describing it as "mind-boggling" and Sergio Perez as being "from another planet".

"If Hamilton is also so superior this weekend in Qatar, and then in Saudi Arabia and Abu Dhabi, we can write off the title," said the Austrian, according to F1-Insider.

"I have never seen such a rocket engine from Mercedes," he added. "We couldn't hold Hamilton on the straights, even though he was driving with a rear wing set at a similar steep angle to Monaco.

"But only Hamilton has that speed, the other Mercedes drivers are no cause for concern for us."

Over the course of a weekend which saw the war of words between the two teams escalate, Christian Horner and Max Verstappen both openly expressed surprise and concern at the Mercedes pace and questioned how it was being achieved.

"We are mainly concerned with two things, which we may also take up with the FIA for clarification," says Marko. "But there will only be a protest if we have evidence that something is not compliant with the rules on Hamilton's car."