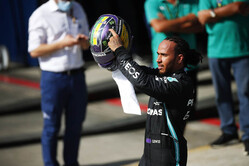 Yes, you read that right... Brazil winner Lewis Hamilton has been fined €5,000 for having his seatbelts undone whilst on track.

According to the stewards, Hamilton undid his seat belts on the in-lap at the end of the race as he leaned out of his car to take a Brazilian flag from a marshal.

While the stewards were sympathetic to his desire to celebrate, it is fundamentally unsafe to undo the seatbelts while the car is in motion.

"Slow speeds in these cars are very fast for an unrestrained occupant," said the Interlagos stewards in their ruling. "Further, Formula 1 drivers set the example for junior categories. It is critical that junior category drivers learn the importance of using all the safety devices of the car at all times."

As a result, Hamilton, who was handed a 5-place grid penalty for today's race after taking on another engine, whilst also being disqualified from the Sprint qualifying session, is fined €5,000 with an additional €20,000 which is suspended through the end of 2022.

Speculation that the stewards are also considering penalising the British driver for his dress sense, preferring dogs to cats and supporting Arsenal are thought to be wide of the mark… though we wouldn't rule it out.