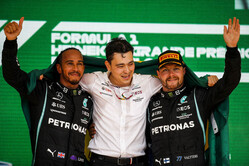 Toto Wolff's frustration at a 'difficult' Brazil GP weekend was probably best summed up in the images following Lewis Hamilton's successful move on Max Verstappen for the lead of the Brazil Grand Prix.

TV footage in the Mercedes garage showed the Austrian raise his fist in a defiant gesture aimed straight at camera - the message was clear, as were the intended recipients.

Following a weekend in which his team and driver had seemingly had everything thrown at it, Mercedes had still come out on top, despite, in Wolff's opinion, the best efforts of the stewards.

"Lewis was clever, super clever, avoiding the contact," he said of the controversial Lap 48 incident. "It was great to see these two super drivers, but not giving it five seconds or so? Come on!

"I'd like to see the onboard of Max actually," he admitted. "It's pretty spectacular how he does it, but I think Lewis cruising around him to avoid the contact was even better."

Clearly, that move was the successful conclusion to a tough weekend.

"The whole weekend went against us," said the Austrian. "We had a broken part on our rear wing which we couldn't look at and analyse, failed the test and was disqualified very harshly.

"And then you see on the Red Bull, repairs three times in a row on the rear wing while staying in parc ferme with no consequence.

"That's one thing and that really peaked with the decision in the race, which was really the wrong defence for Max. Absolutely an inch over the limit, but he needed to do that to defend.

"Lewis just managed it even more brilliantly by avoiding the contact and ending the race that way, but that was just over the line, it should have been a five second penalty at least. Probably Max knew that.

"But just brushing it under the carpet is just the tip of the iceberg. I mean, it's laughable.

"The stewards have a difficult life anyway," he admitted, "whatever decision they take, one team is going to be grumpy. In a certain way, when you are taking punches all weekend and then you have such a situation on top of everything, you are just losing faith in a way."