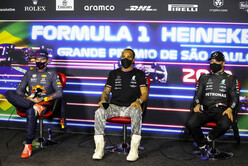 Q: Max, you had a fantastic race, fighting until the end. Lewis was bit ahead in terms of the pace. What are your thoughts for all of us here?
Max Verstappen: Yeah, we tried everything we could of course. I think It was a good battle but of course at the end we just missed a little bit of pace. But we gave it all today and it was a lot of fun.

Q: Congratulations, it was a really nice race to watch, especially this battle, so what do you think for the next race? Ready to fight to the end as you did here?
MV: Yeah, we still have a good points lead you know, so today was a bit of damage limitation on a weekend where it was a bit difficult but I'm confident that in the coming races we'll bounce back.

Q: Valtteri, the start yesterday was fantastic but maybe a bit different today especially in the first corner by being a little on the outside. Also when I saw you saw breaking for corner four maybe the grip was not 100% there, from the track, so can you explain your race today?
Valtteri Bottas: Yeah, the start was quite tricky. I'm a bit disappointed with the start and the first lap, but I tried. Afterwards the pace was actually quite OK. I thought we could have done one stop quite easily but we decided to do two stops, but I'm glad we could get more points than Red Bull. Lewis had an amazing drive today. He was in his own league today.

Q: And do you think the Virtual Safety Car was a little help also to pass Checo?
VB: Yeah, the VSC was in a good place for me for once, so I was happy with that. Yeah, still solid points.

Q: Lewis, it's very difficult to do the questions for you. You are not the driver of the day but the driver of the weekend. Yesterday what you did was just incredible. I saw your face after the race yesterday and today what you give, fighting and overtaking, and also for the people, really for me you were the driver of the weekend. Did you feel anything different because the people were supporting you 100% from yesterday?
Lewis Hamilton: I appreciate that, dude. I think I feel what it was like for you here with all the support in 2007 with your amazing country. I'm so grateful for the incredible support I've had this weekend. I've not had it since like Silverstone was when I had my own... a good group of support, but since then it's been really difficult. So to hear these throughout the weekend has been really humbling. I've been saying 'obrigado, Brazil'. I'm so, so grateful, as I said. What a race. The team did an amazing job, Valtteri did a great job today to get as many points as possible. I was pushing, you know how it is, just pushing as hard as I could. From last on the grid and then another five place penalty I think it was the hardest weekend I've had. But my dad said... he reminded me of 2004 when I was in Formula 3 in Bahrain, I started last and I finished 10th and then I finished first. So, this one's for my dad.

Q: Can you tell us about the overtaking and can you tell us about the next race? Is it extra help for you to fight for the championship and nothing to lose?
LH: Coming into this weekend I never, ever thought that we would be able to close the gap like we have today. These things that just kept going against us, but I think it shows for everyone, just never give up. Whatever you are facing you have just got to keep pushing, keep tumbling away and never, never stop fighting. And that's really how I've approached this weekend. Inspiration from all round. It feels like the first because I don't think I've had a win for a long time.

Q: Many congratulations Lewis, that was a terrific victory, just tell us how you did it?
LH: Thank you. Jeez, 101, I forgot that's where we were, so we start again. It's been such a difficult weekend for everyone in the team and I think really I've just been inspired by everyone's focus and determination. No one being... It's easy to get down when you are faced with difficult things like penalties and engine penalties. But everyone just stayed positive, everyone has done such a great job. The mechanics did a fantastic job. And the strategy also was solid. Then it was just really down to me to kind of let go of things as quick as possible as just focus on moving forwards. But did I think we could come from last... I didn't know what was possible but I just gave it everything. This has definitely been one of the best weekends, if not the best weekend, I have experienced in my whole career.

Q: When was the last time you overtook 25 cars in a weekend?
LH: Uh, never. I have definitely done something like... when I was in Formula 3 I think I started 20th in Bahrain and came 12th in the pre-final and then first in the second final. After that showing McLaren re-signed me. It was a good result. I was fighting for my career at the time. Without them I wouldn't have been able to make it to Formula 1.

Q: And can you talk us through your immense battle with Max?
LH: Yeah, it was tough. In front of me he generally could match my pace. I would say particularly or more so in the last sector. It was very, very difficult to follow in the last sector and to get as good an exit as he did in Turn 12. So I kept coming up the straight and it wasn't that easy to be in his DRS. And even if I was in the DRS zone it was a bit too far away. But I just kept trying, just kept pushing. Obviously I had that one chance into Turn 4 but I couldn't hold it. We... Yeah, it didn't work out. Then I saw I had that experience and just made sure that I didn't make that mistake again, but I was adamant and determined to get back into that position. Yeah, it was fine. This is what a World Championship battle should look like.

Q: Just referring to that first attempt to overtake Max on lap 48, what did you think of Max's defence?
LH: In the heat of the moment, it doesn't... I don't really know. I think I was ahead initially, and I think he held his ground and we both ran out of road. Well, I think he was running out of road, so I obviously had to avoid to go out of road - but I mean, I didn't think too much of it and obviously I'll have to watch the replay, but it's hard battling and wouldn't expect anything less really. We didn't touch wheels, which is good.

Q: You said that you learnt a lesson on that attempt. What made the difference ten or so laps later when you did pass?
LH: I got into Turn 1, I got to kind-of dummy him as such into Turn 1. I was either going to dive super-late into Turn 1, so then he had to block, and I got to be able to position the car correctly through Turns 1 and 2, and I already knew through Three that I would have a far better slingshot past him because I was closer. At that point, I just knew I was ahead going into the braking zone, so yeah. And after that it was really trying to keep him out of my DRS, which wasn't too difficult, because I guess it's hard to follow behind. It's just the first one lap, I think the first lap, or the first lap he got around, just making sure, but it was fine after that.

Q: And the gap in the Championship is now 14 points with three races to go. Can we just get your thoughts on that?
LH: Going into this weekend, since this year has been so difficult, I think for all of us, but we came in after the August break hoping we would be in a better position and we weren't, and we've not really had a spectacular showing, so I would say we've had two races that we've been ahead but the others we've really struggled. I think coming here 19 points behind, obviously only one point ahead in the team championship, we really needed a solid result - but then obviously we had all these penalties, which just made it... mentally you could just think it's over, it's impossible but then nothing is impossible if you put your mind to it. So that's really just why we cultivated a positive mental attitude, and went in fighting, guns blazing.

Q: Max, coming to you, it was a fantastic drive by you today as well. Can you just talk us through the race from your point of view?
MV: Yeah, I think first of all, we had a good start. So that was, of course, very important, to get ahead, and basically from there on just trying to manage my pace, then of course we had a Safety Car, Virtual Safety Car for the debris and stuff, and then of course at one point Lewis was behind me and I could see there was a lot of pace, and it was already quite tough to match that. I think in general we did all the right calls, and trying to just cover, so there's not much really to say about that. We were just a bit too slow. And of course, this weekend they were very quick on the straights. I, of course, have to get my lap time through the corners, but it was very hard on the tyres this weekend, the track. It's not ideal but otherwise they anyway sail past you so it's the only thing you can do. I mean, I had fun out there. Of course, I like to win but I think second today, with the defence I did, it's also satisfying and, of course, we're still ahead in the Championship. You can clearly see that one weekend it looks really good for you, then the other weekend it looks really good for them. Hopefully it will keep going like this for the rest of the season.