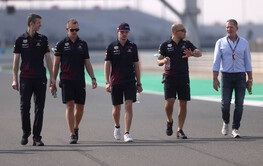 Ahead of the right of review hearing, Max Verstappen has defended the incident at Turn 4 last weekend insisting that it was a "great battle".

As Mercedes prepared to meet with the FIA and provide the relevant new evidence that might cause a right of review of the controversial incident, Max Verstappen was taking part in a rare track walk as F1 ventures into unknown territory.

Speaking at the press conference, he was asked about last week's incident which could see him demoted to third in the results or handed a grid penalty this weekend.

"No, not really surprised by that," he said of Mercedes' call for the incident to be officially reviewed after new footage of the incident had become available.

"But that's how it goes," he added. "I didn't need to look at the footage because I was driving the car so I know exactly what happened.

"As a driver I think we know exactly what we can and cannot do in the car," he continued. "We were fighting hard, braking late into the corner, the tyres were worn, and if I would have turned more abrupt to the left you'd just spin off track. That's why we are the drivers, so we try to control the car.

"Like I said last time out, I thought it was a great battle," he added, "and I had a lot of fun as well out there.

"At the end of the day they won the race fair enough, they were faster than us, but I thought it was a good battle."

Asked if he feared that off-track events - no pun intended - might sour the championship, the Dutchman replied: "To be honest I don't think about it too much because it's also not in my hands these kinds of things. I'm the driver, I just need to focus on what's happening on track."

Asked if he feared a penalty should Mercedes prove successful in its bid to have the stewards original decision overturned, Verstappen said: "I don't even think about that.

"Also, it's... it's not the end of the world," he added. "But again, I don't expect that to happen because I thought it was fair and hard racing, between the two guys who are fighting for the championship.

"It wouldn't have been any way an easy pass," he insisted. "Because it's not who I am, and I don't think how it should be when you're fighting for the title."

Check out our Thursday gallery from Qatar, here.